A Mecha month isn't complete unless it has some Transformers in it, but I don't really have any regular Transformers that's unopened - I've been opening them up in the past because those Transformer boxes are such a waste of space! - so I've only got these left. Star Wars Transformers. There's quite a load of images on the Facebook album, which has the subtitle of "In an alternate universe far, far away..." 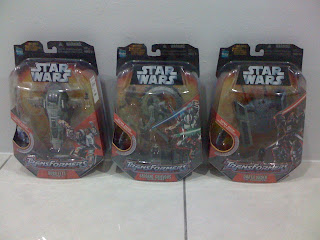 The packaging is boring, despite the goodies that Hasbro threw into it. What's with those spinning disks that does nothing outside the bubble once the toy is open? Boring. The Star Wars and the Transformers logo stuck on separately - unimaginative. They could have at least created a nice merged logo of some sort for the line. 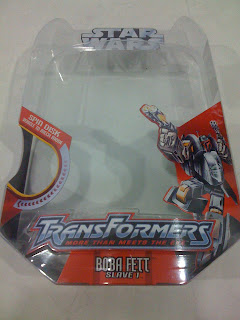 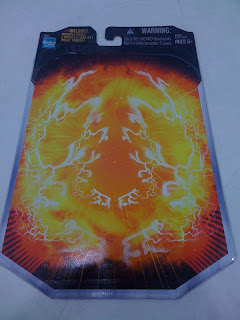 The front of the card back features some flames or whatever it is. Again, it's boring. They could have done so much there with this. 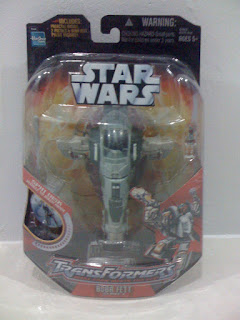 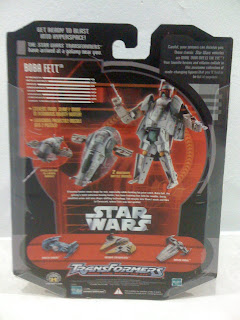 Let's do this in alphabetical order. Fett is first because he (it?) starts with a B. Go figure that out. There are only 3 things visible through the bubble - Slave I, Fett and a missile. 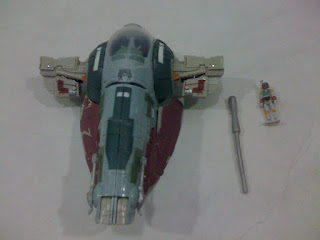 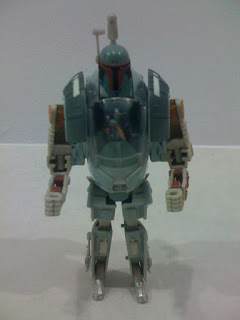 Well, that's indeed all there was to the toy. I like the fact that there is a mini Fett included with the toy (hey Nick, here's an action figure for you, although it reminds me of Mighty Max/Polly Pocket figures), and he fits into the oversized cockpit on the Slave I. However, the mini Fett can't seem to stand properly - perhaps it's an issue with his one and only articulation point at the waist? The Slave I itself transforms nicely into the big Fett. However, the limitations of the vehicle mode means that the legs are undersized and can't support the figure properly. As a result the figure can't stand too well. 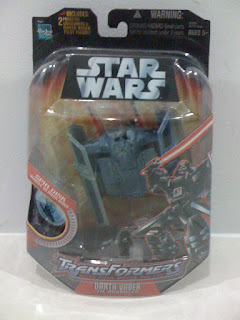 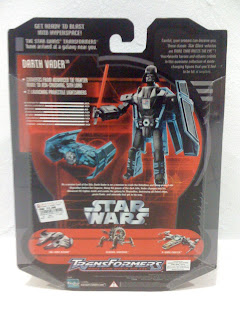 Next is Vader since he starts with a D. Heh. My Vader apparently has some plastic colour issue - I think it degraded over time and now it's an ugly mismatch of blue and green. 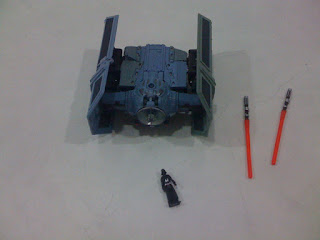 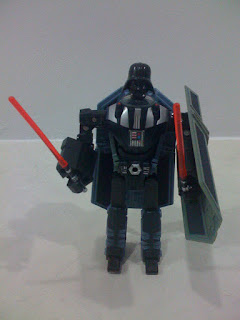 The figure includes the TIE fighter, 2 lightsabres and a little Vader figure. The small Vader looks nice and stands tall. It, like the other minis in the line, has one articulation point. However, the Vader is a wee bit too tall to fit properly into the TIE cockpit. The TIE transformation is rather smooth and the overall model is intersting. One wing of the TIE is transformed into Vader's cape, which is a nice touch. 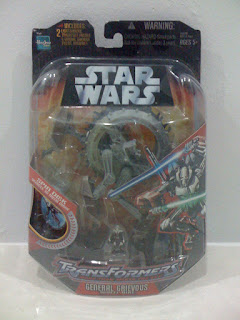 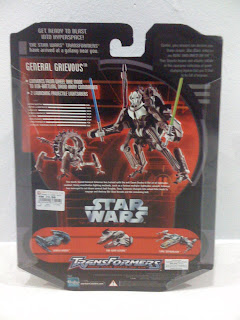 Grievous makes it three, and he has the most parts out of the three. There are three multihued light sabres here, one more than Vader. 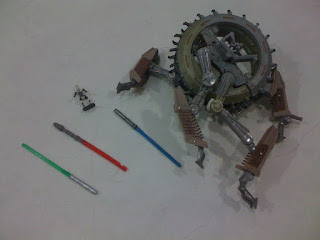 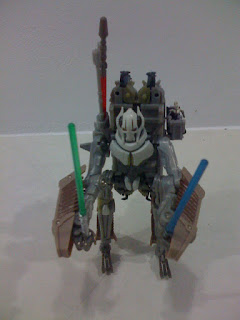 The little figure is a bit skinny, but he does stand properly. The droid's transformation is messy and difficult to achieve, and this took me the longest time to transform. The leg joints had a tendency to come apart very easily, which didn't help with the transformation either. However, the final robot mode is nice and well designed, with the cockpit chair rotated such that the little figure can still sit in it at robot mode. 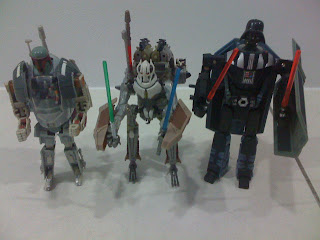 Overall, this has the signs of Hasbro trying to milk both the Transformers and Star Wars crazies (fanatics?) for more cash. Well, I guess they must have succeeded because I got 3 of them. I don't think I will even display these since they can hardly stand. Back into the box they go.
Posted by Novelty at 23:31