We march on this week - Femme Week, which is part of MotU May.  This Evil-Lyn will be the last Femme this week, and it follows after the Millenium Lyn and the NECA Lyn, which are posted on Is It Fun? and Hobotastic respectively as part of the Blog Mash Bash. 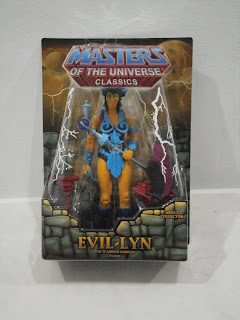 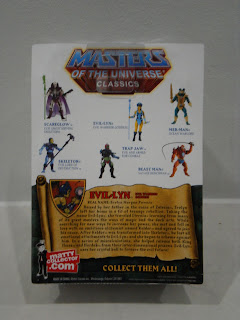 Well, there's nothing special about Evil-Lyn's card.  The bog standard front and bubble and title card, the bog standard back.  She holds her wand in the package, which is good for MOC collectors, but I'm not sure I about the way Screech is folded up there - sure, it deplays Screech, but perhaps not the best way of displaying it?  Her bio seems to be the most freakish combination to me, a merger of all her other selves such that she's like this Frankenstein monster going by her bio.  I know I definately do not like it.  Another curious thing is that only Evil Warriors are shown on the back of the card.  Hmm... I wonder whatever happened to the Heroic Warriors, or even Hordak, which is mentioned in her bio. 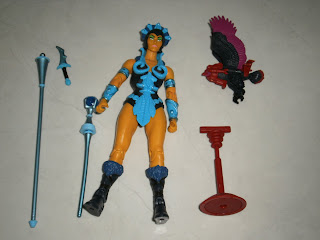 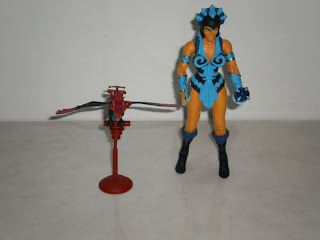 There are 8 pieces once opened, the figures herself, 3 pieces for the wand, the dagger and 3 pieces specifically for Screech.  The figure is basically a Teela repaint with a new head.  I know a number of people were not happy about the fact that it was a straight repaint, but personally I like it.  I also like the Simpsons look, which again is a nod to her vintage self.  Millennium fans are probably screaming bloody murder out there so I hope they will get a version of their Evil-Lyn.  I was glad that there was no bobble head on this character, but Mattel really do need to fix the gauntlets - for the third character in a row, they are on the wrong arms it seems! 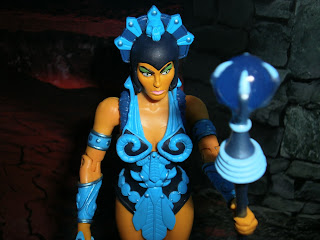 Well, this toy is definately marketed to the Adult collector.  Just look at the clevage on the figure!  Granted, it's not as obvious as to hit someone over the head with it, but it's still there nevertheless.  I never noticed this on Teela, because I'm not that huge a fan of Teela, nor did I notice this on the Goddess, because the translucent green flesh thing just creeps me out. 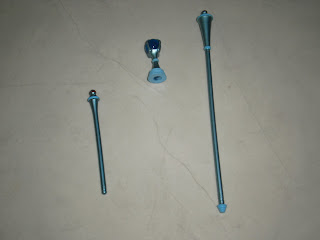 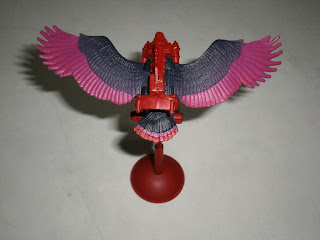 Like Teela and the Goddess she comes with a whole lot of accessories.  Unlike Teela, it's not to make another character.  Unlike the Goddess, it's not a guy's accessory.  There's the knife.  It's pretty decent and sculpted with quite a bit of detail.  It's also painted to match the character, which is a good touch.  Then there's the wand/staff - the crystall ball is the same, now what it becomes depends on which stick you shove into the hole.  The shorter stick with the ball will create the wand, the longer stick will create the staff.  Either way, the sticks  has a nice metallic paint which I liked.  The one downside?  The staffs do not glow in the dark.  Oh well.

Screech is basically a repaint of the green Eagle from DCUC Beast Boy, which was repainted as Zoar with Teela and the Eagle for DCUC Wonder Twins.  However, unlike the Zoar which came with Teela, this Screech has a stand and its missile pack.  That's so much better.  Now I wish they made these available for Zoar together with Teela (or even the Goddess, instead of the He-Man armour stuff).  Since Zoar is just a repaint (or Screech is just a repaint), the stand and missile pack fits Zoar perfectly too. 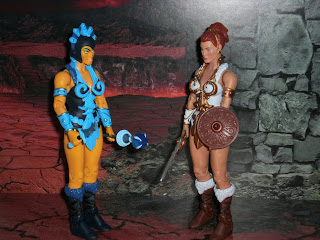 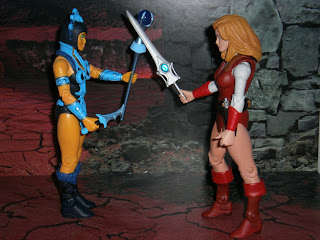 Eventhough Evil-Lyn and Teela are basically the same characters with different heads, I really don't see them as such thanks to the different accessories and colours.  Yes, the distinctly yellow Lyn sets her apart from plain ol' Teela.  Likewise, Adora, who share a large number of parts with Evil-Lyn looks so completely different ass well thanks to the touches here and there on Adora. 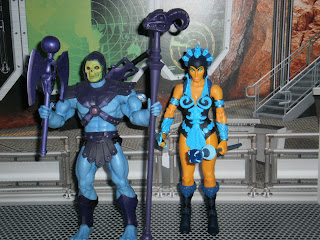 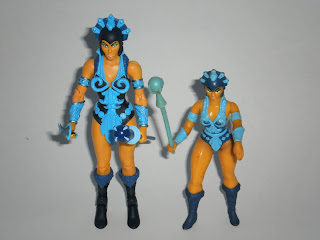 The MotUC women are also nicely proportionate to the men.  When placed next to Skeletor, she doesn't look anorexic - nope, no way.  Instead, she seems lean, atheletic and muscular in a feminine (and feline?) kind of way.

When placed side by side with her vintage figure though, the MotUC Lyn seems to be such a better upgrade.  For starters, she looks less like a Barbie doll.  However, all the details on the vintage Lyn are faithfully reproduced on the newer edition - down to the colour of her eye-shadow/mascara.  I like it that the headress has stayed true to the original.  The one thing that did not stay true to the original - the gitd staff. 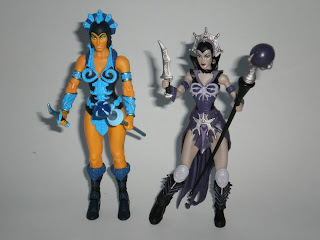 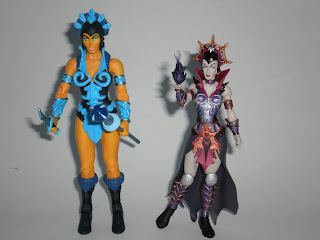 It's almost difficult to compared this Lyn to her Millennium and NECA versions.  Those versions have pale flesh and a lucious set of red lips when compared to her.  Still, her articulation is a lot more superior to either version.  The details of her dress is also better since it's based off the vintage dress.  As I've said in my reviews of those Lyns, their dresses (at least in front) is a mess.  Actually, looking at them again, I think there are kinky connotations to those dresses that is thankfully absent from the vintage and MotUC Lyn.  She doesn't need sex to sell herself and cheapen her character - she's a strong woman and that should be enough for her.

Oh and her dagger is almost the same as her Millennium version, which I guess is the only nod to the Millennium fans. 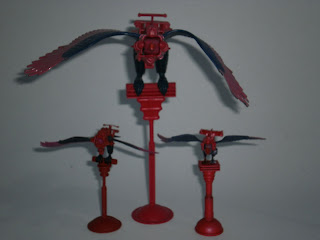 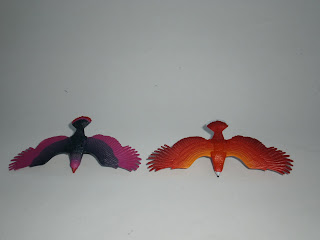 Now, what about Screech?  Well, Screech is not a Big Jim repaint, so it's not oversized for the line.  In fact, being a DCUC repaint, one would have thought that it would be smaller in scale, but thankfuly, that's not so.  Like its vintage counterpart, Screech has a removable Missile Pack and can be detached from its stand, both of which cannot be done on the NECA Screech.

I like the "wash" on Zoar from the same line and I was hoping that Screech will follow a variation, but alas, Screech follows the same colour scheme as the vintage screech with the two colours being distinct and blocky.  The only gradient is from between the beak and the body of Screech, which shows that it can be done had Mattel wanted to. 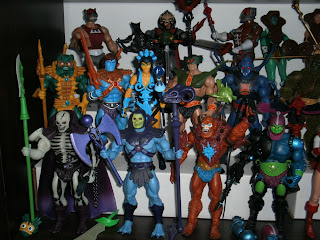 And there's Lyn with the rest of the Evil Warriors on my shelf.  Bring on Clawful and Stinkor!
Posted by Novelty at 15:04