Royal week continues with the alt-ego of Prince Adam - He-Man.  However, it's He-Man with a twist, and by that I don't mean just the pants.  The Millennium line has way too many alternate He-man, each with a slightly different armour and different weapons, so today I'm focusing on Shield Strike He-Man.  But to read all about it, you'll have to head to Is It Fun? where it appears as part of the Blog Mash Bash. 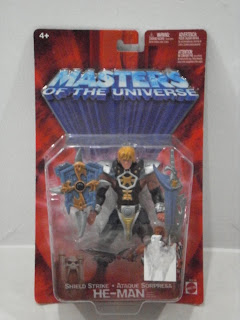 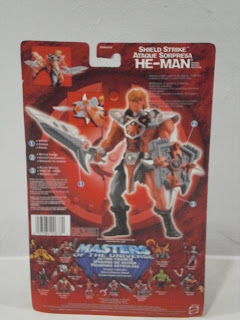 Edit: Is It Fun? has been suspended, and the review is not recoverable.  So here's a fresh new review.

So, Is It Fun? is down, and that was where the original of this review was posted.  Now, more than half of the reviews were recovered via Google's cache, but this one isn't one of them.

Shield-strike He-Man, basically is a variant He-Man of the millennium line, and he was one of those "killin teh lien" figures.  This one comes on the older red card, which as regular readers will know is the version I prefer over the green Snakemen version.  The display in the bubble shows off his weaspons nicely, but the weapons do not obscure the figure itself.  The title card has that nice illustration as well as Castle Grayskull.  The back of the card has the action features for this character nicely shown, together with the other figures released at around the same time as this figure. 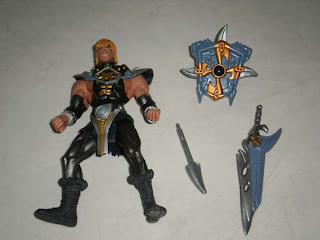 This He-Man comes with a very weird sword, that doesn't even look like a sword.  It's what fans these days will refer to as hyper-anime detail, but really, it's more pseudo than hyper-anime.  The other accessory that this He-Man comes with is the shield which give rise to his name.  The shield is nicely sculpted with a gem in the middle and lots of detail.  The paintwork uses the gold to detail out how the blades continue into the shield.  The shield is even designed such that one of the blades can be fired, which is a nice action feature. 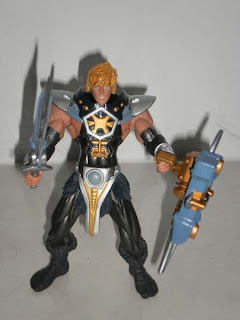 The figure itself has has the usual fallacies of the millennium He-man - anorexic waistline, french fries for hair and all that.  Nevertheless, the design of the armour has been done thoughtfully, and the wide shoulder pads and long loincloth in silver nicely complements the black pants and harness/vest that the figure is wearing.  Thankfully, there's no action feature on teh figure to hamper the articulation, but the lack of articulation on the knees means that this He-man still has a semi-fixed posed.

Well, this has been one of the four reconstituted reviews.  Hopefully I won't have to do too much of these and that the other sites that I've posted guest reviews will at least have the decency to let me know first before they suspend their sites.
Posted by Novelty at 15:03