Wow, toy #150.  I guess that's a milestone of sorts.  We're still in MotU May and today I'm opening Wun-Dar.  Which Wun-Dar?  Well, there's only one version of him - Classics. 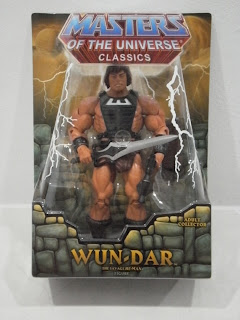 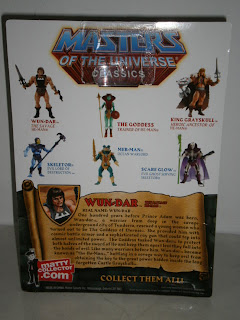 Wun-Dar comes on the usual card, but gets a brand new bio, and brand new artwork.  He looks a bit weird in the art which is supposedly from one of the original artists from the 80s.  Hmm...  For those who do not know the history behind the figure, he's based off what's popularly known as "Wonderbread He-Man", a variant that was supposedly a promotion that Wonderbread (a bread making company) mailed/sent out.  That variant He-Man had brown hair and darker boots and furry pants than the original He-Man. 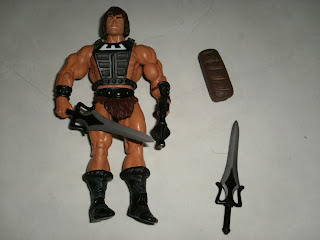 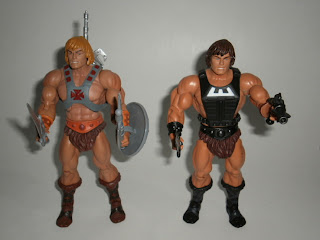 In honour to his Wonderbread roots, Mattel has decide to include a loaf of bread for a laugh.  He-man also comes with black Zodac armour and a black Zodac gun, which was the armour and weapons he was associtted with in his urban legend; both these pieces are part of the vintage Weapons Pak (and because they are included here with Wun-Dar, the black versions of the gun and armour are not included in the Classics Weapons Pak, being replaced instead with a bright pink version).  Wun-Dar also comes with a black version of the power sword (the sword of He?  I'm confused as to what the sword is called these days - Thanks Mattel!  Not!) as well as the black half sword. 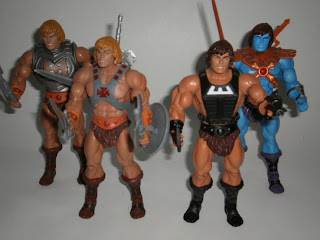 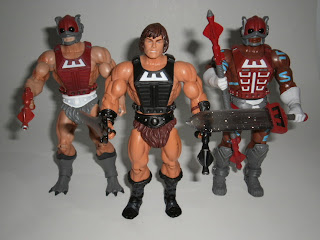 This is the fourth figure based on He-Man (and the fifth version counting repaints - there's also the  DC comics coloured He-Man from the He-Man vs Superman 2-pack).  As previously mentioned, the colours are darker on Wun-Dar than the usual He-man.  There's nothing much to say about the figure anyways, being a repaint.

Wun-Dar is also the third Cosmic Enforcer so far, after Zodac and Zodak.  Surprisingly he fits in more with this group than with his He-Man alternates.  Wun-Dar is also a nice base to make Barbarian He-man with the Beastman armour from the Weapons Pak. 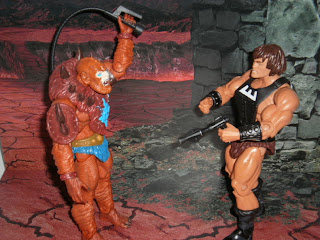 At the end of the day, this figure is a nice nod to the history of the He-man mythos, but it isn't that great a figure.  He's also only available if one purchased a subscription though, so he's a bit rare out there when compared with the other figures.  For those who do not have him, you aren't missing much.
Posted by Novelty at 09:11