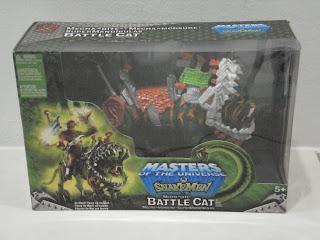 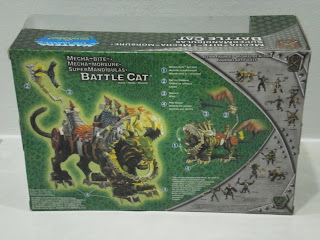 Today we're looking at the green boxed Mecha-Bite Battle Cat.  This isn't the first Battle Cat I've opened this month - last week I opened Samurai Battle Cat.  I'm not a huge fan of the green card, but I must confess, this green box does a lot better than the card.  For starters, it's bigger and it gets to display the toy rather well.  There's even space for box art on the front.  The back is nicely arranged with the toy and its features listed on one side (well, most of one side), with the cross sell figures taking up two corners on the other side.  I like the arrangement. 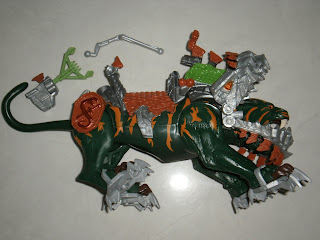 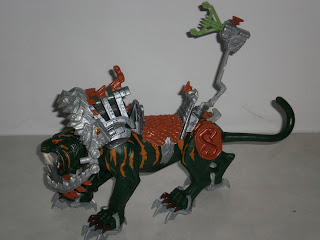 Out of the box, there seems to be a few minor pieces, for a missile launcher that attaches behind the saddle.  The figure itself is the usual millennium battle cat green and yellow, but the saddle is moulded onto the figure.  Then there are those huge jaws.  They seem to get in the way of the head, and I don't see anyway which the huge mecha-bite jaws could be removed.  I think those jaws are ugly.  This Battle Cat also comes with shoes, and thankfully these are removable, although I don't mind them much. 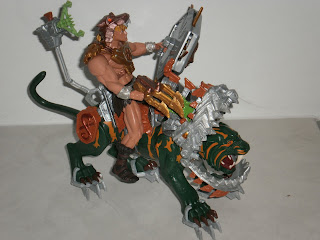 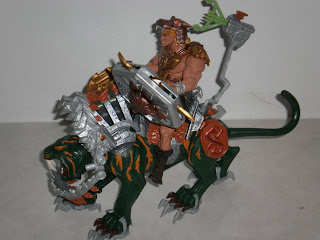 I had Wolf Armor He-Man handy, so I used that to try out this Battle Cat.  I like how the claws on the He-Man matches the shoes on the cat, but that's a minor point.  I'm also rather surprised that the figure sits so well on the saddle, and that he does not slip.  There's no seat belt on this Battle Cat!  I was also a bit skeptical about the missile launcher behind the saddle - I thought it would be poking into the rider's back.  Sadly, that's not so. 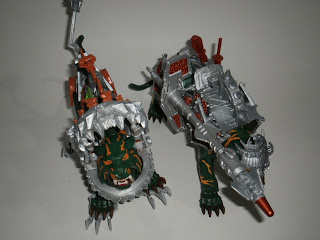 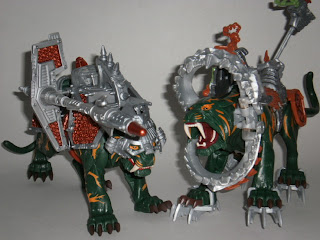 Comparison time?  Well, let's compare him with the handy Samurai Battle Cat from last week.  Hmm... the head sculpt seems to be the same, and the colours, including the silver used for bits and bobs here and there are also the same.  The metallic orange from Samurai wasn't reproduced onto Mecha-Bite though.  Although the basic sculpt from head to tail is more or less the same, Mecha-Bit seems a lot bigger, thanks to the shoes and the huge jaws and the missile launcher at the back.  I still prefer Samurai though, as it doesn't have those crazy jaws.  I might just remove those shoes from Mecha-Bite and place them on Samurai instead.

So there you have it.  The second Battle Cat in two weeks, and this one was more of a disappointment for me.  Hopefully tomorrow's Creature Feature will be better!