It's a new week on MotU May, and this week it's Bionic week.  Well, to continue from Creature Feature last week, coupled with this week's theme, today I'm opening Dragon Walker. 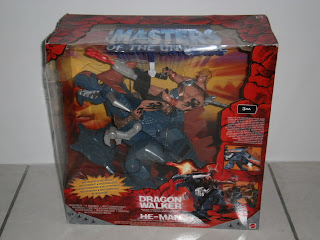 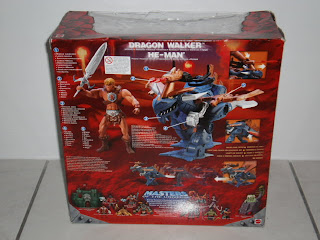 I don't really remember Dragon Walker, so I have no idea when it was released.  It's in a red box with a window, which suggests it was near the end of the first season, before it became the green box, so that puts it in the middle of the millennium line.  The box is jam-packed and as a result looks crowded.  I like the window on the front and the posing of the toy inside, but it means that everything on the front is squeezed to one side including a huge block of text.  The back is better displayed, but still looks messy with the huge amount of text.  The one interesting thing about the back of the box is the background, which is different from the usual red box background. 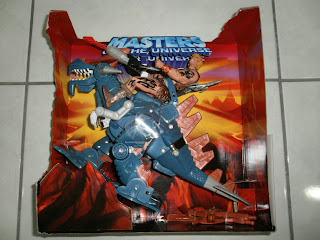 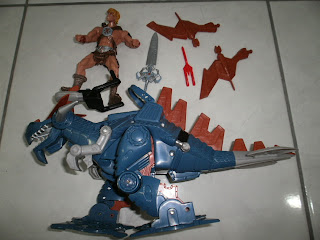 The tray is nicely painted, and the walking uphill pose of the Dragon walker is perhaps the only way to fit the entire toy into the box.  Out of the box, there are 6 pieces - He-man and his sword and the Dragon and 3 other bits. 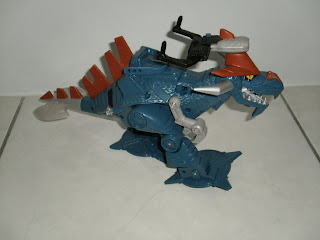 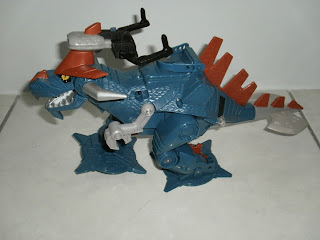 The dragon itself is a bad caricature of a dragon - it's cartoonish looking overall, and very angular.  It's almost as if it's a toy from Cartoon Network's Dexter or Samurai Jack, instead of being from He-man.  There's some bionic parts grafted on, including the hands and the tail, and there's some articulation there.  The legs are motorised and he walks rather comically.  He's also very top heavy, which is why the feet have that weird lilypad shape. 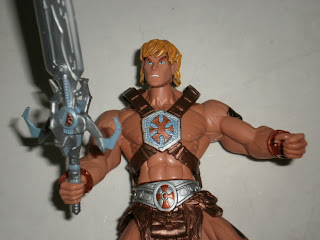 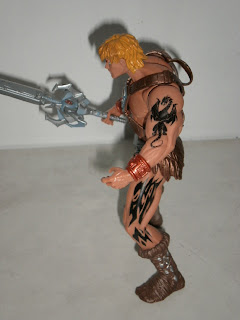 The He-Man included with this figure is just a repaint, including the repaint sword.  Which means he stillhas french fries for hair and is anorexic looking.  I guess that's what happens when you stick fried potatoes on top of your head instead of stuffing them into your mouth.  What is nice about the repaint (and it did remind me of Lemonjuice) are the tattoos on the right side of hsi body.  It's nice and weird at the same time though - I mean, what is the message that this He-man is giving out to kids?  That body mutilation for decorative purposes is OK?  Maybe. 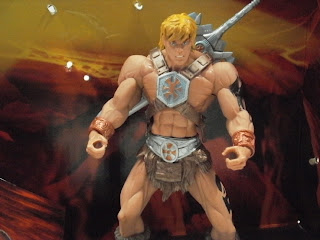 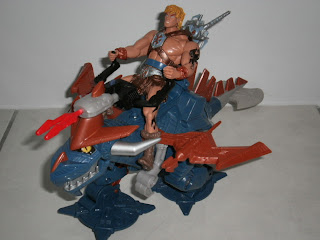 Have I mentioned how much I like the trays as backdrops?  It'd be even better if there weren't any holes in the tray.  Oh well.

The dragon has a seat belt such that the figure (He-Man in this case) rides smugly on the dragon.  It's rather secure and won't fall off while the Dragon is walking thanks to his mechanised feature. 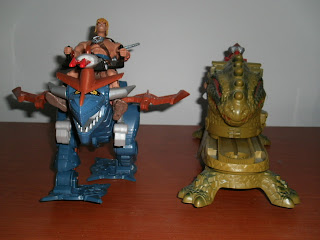 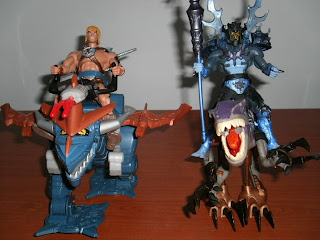 I understand that Mattel is in the business of making toys targetted at kids, but the Dragon Walker is one of the few examples of how badly they did their jobs.  Generally the vehicles and beasts of the millennium line was great.  This is one exception.  This Dragon Walker is not as innovative as the vintage version, doesn't look as great as the other beasts in the same line, and has a lame action feature which drives up its price.  OK, I'll get off my soapbox now.
Posted by Novelty at 01:17