Well, I'm still plogging (is that a word?) the Dead Dudes wave of DCUC (aka Wave 20) in this Justice June, and Figure 4 in the wave is a drama queen... who shows... and has a large bow and lots of arrows.  Oh and he's green and goes by the name of Ollie Queen. 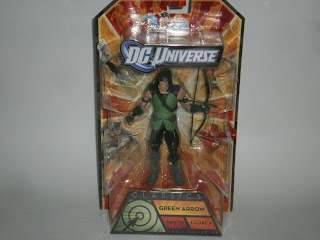 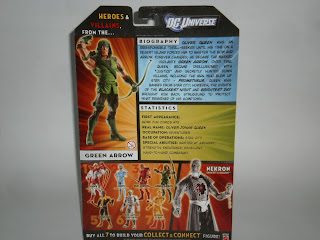 The packaging is what one would expect from Mattel by now.  I'm not quite sure what pose Mattel was going for in the bubble, but the pose on the back of the card shows him reaching to his back to grab an arrow... and it doesn't quite work. 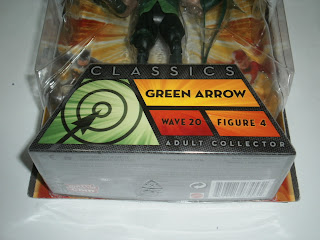 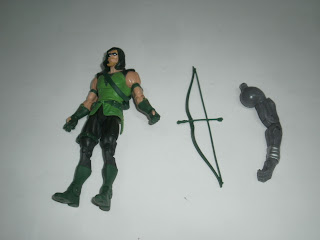 Oh look, a green version of Red Arrow's logo.  Whatever happed to his green G logo?  He comes with a bow, no arrows other than the one that's prenotched into the bow and one of Nekron's arms. 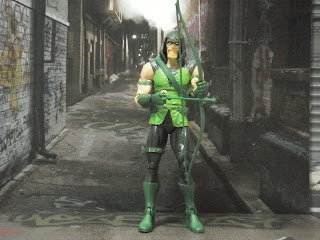 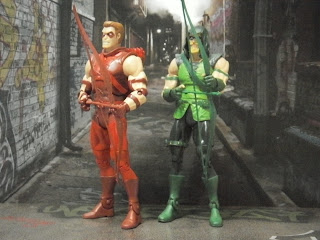 The figure is nice with lots of details, including the knife belt on his leg and all the leather ties on his jerkin.  He has wrist articulation to enable him to hold the bow and that's a good thing.  The sculpt is awesome, although I was hoping for a non-hooded head (which is so cliche). 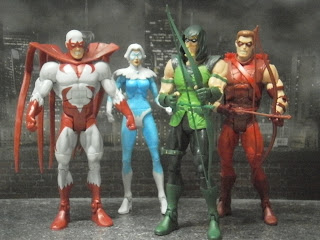 It's not a bad figure, and he goes well with the Green Lantern figure for a dynamic duo (it's about time!).  The wave builds up nicely, and I think he's the main name for the wave, but he's not quite a figure that people will be drawn to as there's a particular archer from another company who's made it big on the silver screen...
Posted by Novelty at 00:26