I thought I had a lot more of the COPS stuff unopened, but alas, I only have two CROOKS left to be opened and a vehicle.  That's not good when I'm basing an entire month around them, well, sorta.  COPS was the majority favourite over SeaQuest from the poll on the forums.  It's Figures February here on Toy a Day and this is the first of the Crooks (to be spelt that way, because I'm tired of typing it with all caps) figures for this month. 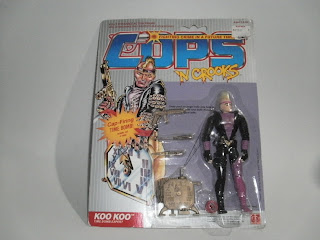 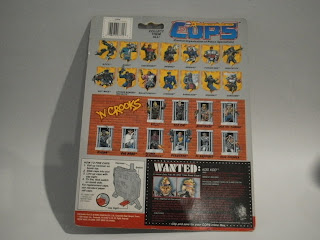 The card is huge, and the figure is way too small on the card.  There's a lot of blank space on the card and it looks, well empty.  The logo on the top seems a bit too complicated, but that's not the fault of the packaging.  The comic image on the left is good, but that starburst in the middle distorts it somewhat - I mean, they have all these space to play with and they use the starburst to obstruct the image?  Not good.  The back of the card has all the characters of the line, a bio and the instructions for the caps on the clock. 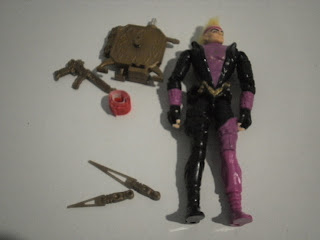 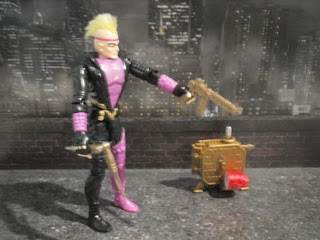 There's quite a few pieces with the figure.  The figure has 7 points of articulation and rooted hair.  Yes, that yellow mohawk is made from rooted hair.  It's a pity that he doesn't come with a comb though.  The clock is the main accessory and it has a hammer that slams down on the caps to produce the boom boom and sparks.  That still works on my figure.  Surprisingly.  Considering that this is almost 20 years old. 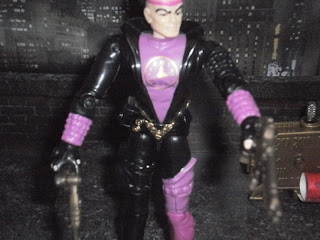 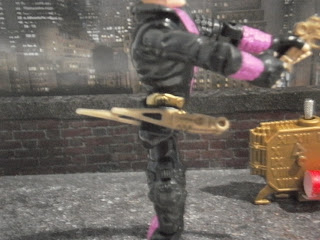 The paintwork on the figure is good, and the tampographed clock on his chest gives him a nice level of detail.  I like the black/lavender/gold colour scheme on the figure, and combined with the yellow mohawk, it does give him the gay-punk look.  His other weapons are a gun and a two piece dagger thing, which actually are the long and short hands of an analogue clock.  That's an interesting piece of weapon design.  And the weapon actually fits into a built in holster on his waist. 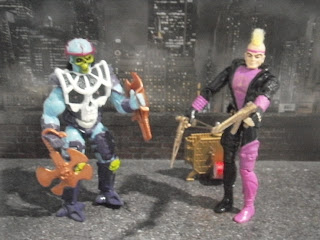 I like this figure, from the rooted hair to the paintwork to the nice accessories.  In fact I like it better than the NA figures!
Posted by Novelty at 00:32