So, Havoc was showing me where Eamon lives and then we went to Forbidden Planet., which was just around the corner  The first thing I saw there on sale were these figures, so I picked up this Aang, and a Zuko (which I'm opening today, but you'll have to wait until tomorrow to read about it).  I can't believe I'm such an Avatar crazy. 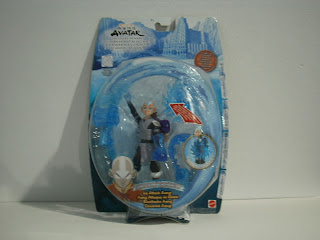 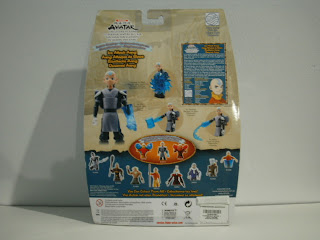 This is a deluxe figure, and it's on the Ice card instead of the Water card.  The round bubble invokes that crystalline ice look and the overall packaging with all the elements (har har) works very well.  The back of the card has quite a lot of wasted space, but consequently it's not as claustrophobic as a cardback usually is and the open layout seems a breath of fresh air (har har, pun not intended). 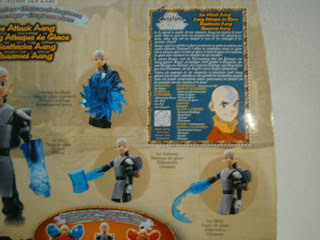 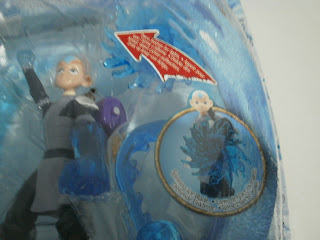 The bio on the cardback is a bit wordy and the text is a bit small, but it does have a nice cartoony rendering of the character.  The action features and accessories are shown accompanied by text which is visually interesting.  Oh and there's an arrow on the bubble which enables Aang's fist to light up when a button is pressed.  Sadly, that feature doesn't work on my character... 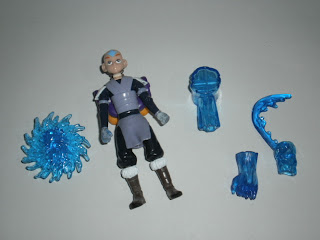 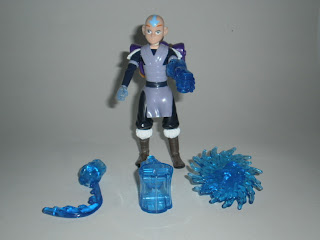 This deluxe character (as opposed to the normal character, of which I only have the Spirit version) has Aang in water tribe togs.  The character is made from shiny plastic and gives the character that cartoony look.  The big anime eyes add to that effect.  The 'skirt' on the character that covers his groin is made from a very rubbery plastic and articulation is not hindered by that flap of plastic which covers his privates fromthe front and back.  The paintwork is spotless, from the arrow on the head to the toe of his boots. 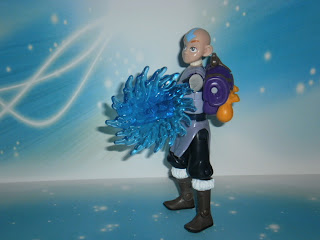 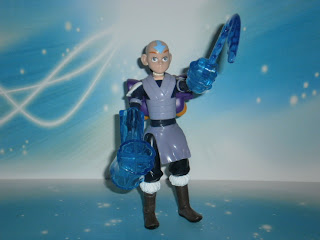 Aang comes with four accessories - an ice shield, an ice scythe, an ice hammer and an ice fist, any which can be worn like a glove over his fists so that they too light up when the button on Aang's backpack is pressed.  Sadly, I couldn't test this feature.  Overall this is a very nice figure and is definitely worth the spare change that I paid for him.
Posted by Novelty at 00:38