This is the last trifecta? triad?  triplet? in the Trilogy week of Figures February.  Spiderman 3!  I knew I had these figures, but they were right in the bottom of the big box.  Until now that is.  They are getting opened. 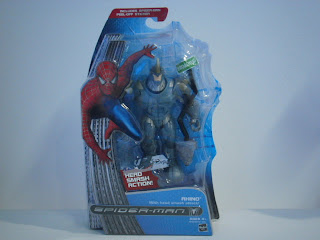 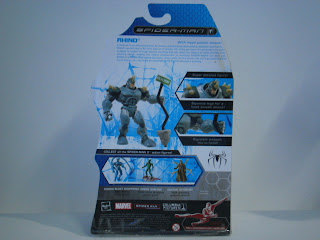 Rhino comes on the standard Spiderman 3 card.  He's packaged in such a way that the signpost is visible through the bubble on the front.  The back is informative and makes good use of the design to show off the toy, the action features and three other figures in the line. 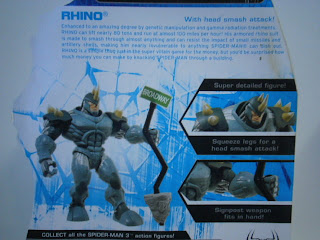 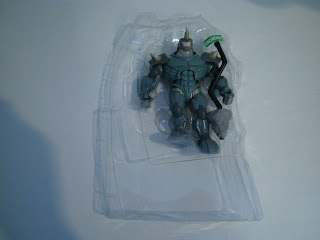 The bad thing is that there's a lot of empty space in the bubble.  Since Rhino only comes with the road sign accessory, the remaining part of the bubble that's obstructed by the title card and the other bits of cardboard is really blank. 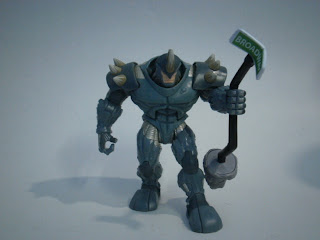 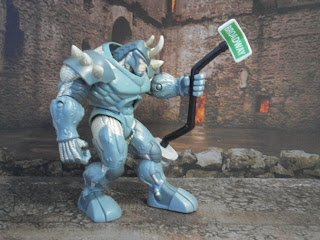 The sculpt on the figure has nice details - the muscles on hsi lats, the horns, even his six pack.  The paintwork is interesting, as there's even a wash to bring out the contours of his body.  The bad thing about the sculpt is that he's got a fixed pose with one leg permanently stuck forward thanks to the absence of knee joints.  I don't understand how Spiderman can have double hinge joints and Rhino gets no joints in his knees. 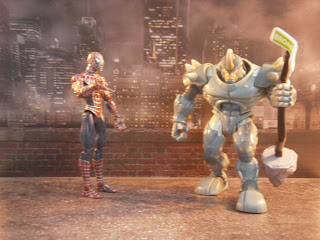 His action feature is that when his legs are squeezed, his head tilts down.  Feh.  He's definitely of limited fun during play, especially with that pose, although the action feature might redeem him some.  Where he is good is on display - as a statue as the sculpt is excellent.  Provided that his one and only pose is that pose that you want on display.
Posted by Novelty at 00:12