It's a new week.  I've got no theme this week, but we are still in Figures February.  Today I'm opening an action figure from the DICE series.  I've never even heard of this cartoon series until I saw the toy and I was unfamiliar with it.  The toys were going on clearance though and I picked up two of them for a buck each about two years ago. 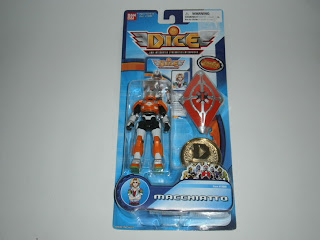 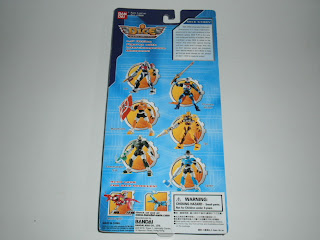 The packaging is long and slender, and very different from what I'm used to on an action figure.  Granted, the figure is about 4 inches tall, but still this is a bot odd to have a packaging that's so elongated.  The front has a rather standard design with the logo on the top, the bubble in the middle and the title card below the figure, and by looking at that there's just so much wasted space on that long card.  The back has a Power Rangers look, and that's not surprising given the fact that it's from Bandai. 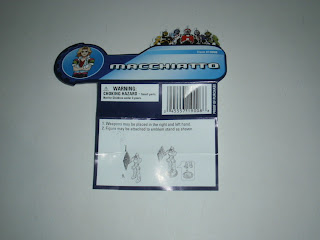 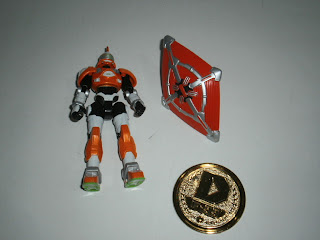 The character has large parts of die-cast metal, and consequently it's heavy.  The sculpt isn't too fantastic, but it's passable.  It has quit a bit of articultion - 6 on each limb in addition to neck and torso, but yet despite this, because of the die cast metal content (top heavy!) and the simple hinge joints, he can't stand too well in certain poses.

The figure comes with a shield and a stand.  The shield is symmetrical and a bit boring, but does have some nice sculpted features.  The stand is in golden vacmetal and actually does look like a real coin, which I thought was a nice touch.  The title card doubles as the instructions for the figure, which is basically how to put on his shiled and put him on his stand.  Blegh. 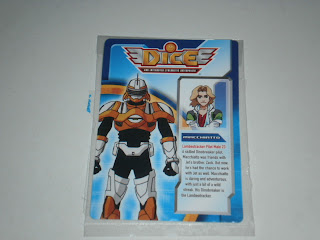 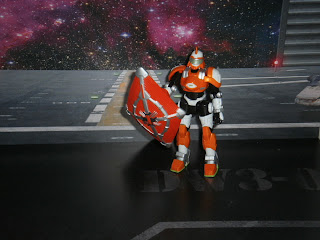 There's also a trading card in the package, which was a surprise, but other than that, this is just a run of the mill figure, albeit one made from die cast metal, which is a bit rare these days.
Posted by Novelty at 00:36