#622 of Year 2 Hot Wheels Back to the Future Delorean

It's still Speed September, and since I've just gone through three Hot Wheels figures, I guess I can do a fourth one.  This one though, isn't from Speed Racer, but a whole different franchise altogether. 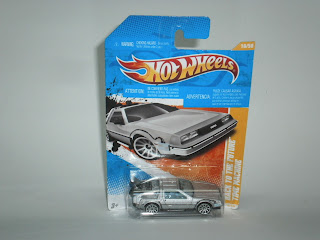 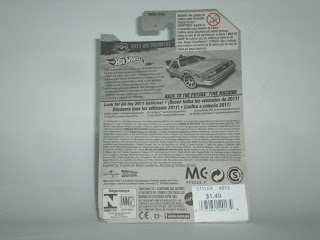 It's the Delorean from the Back to the Future series... and I won this prize from A Year of Toys for designing the logo for the blog.

That's just a logo consisting of letters or logos from the various toylines as listed below.

A - Iron Man.  That's something that has been shown on that blog quite a bit, so I thought it'd be appropriate to include it.
Y - Toy Story.  I like Toy Story, which is why I've included it
E - Lego.  He does Lego minifigures on that blog.  That and the fact that I like Lego makes it a no-brainer to be included.
A - Star Wars.  I think Mario of AYoT is a huge Star Wars fan and therefore it's only appropriate that I have this included in the logo.
R - Marvel Legends.  I don't like Marvel Legends, but apparently it's one of the most posted about toys there, so I included it.
O - Ghostbuster logo.  I like the distinctive Ghostbuster logo, which is why it's there.
F - Transformers.  It's one of the most popular "boys" toys and is the only "robot" representative of toylines on the logo montage.
T - Masters of the Universe, of course.  Mario doesn't do much of this toyline, but I do.
O - Captain America.  I stole conceived of the idea of this logo from Toyhaven where I first saw the shield being used as the letter O.
Y - Polly Pocket.  I wanted a representative of a "girls" line in the logo, and a letter that's not pink.
S - DCUC Universe.  I love the starfield of the DCUC logo. 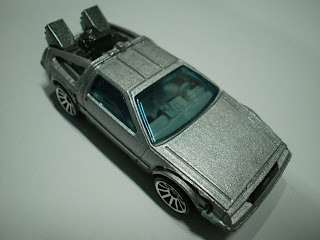 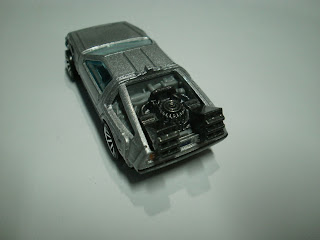 The vehicle is probably accurate in all sorts of Hot Wheels awesomeness.  I'm sure there's even a flux capacitator in there somewhere.  The dashboard is sculpted to represent the vehicle as it was depicted in the films.  The modified rear of the vehicle is also sculpted with all sorts of crazy goodness. 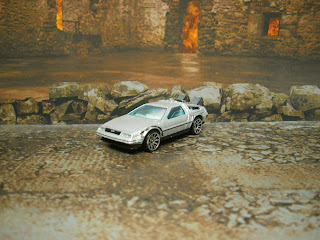 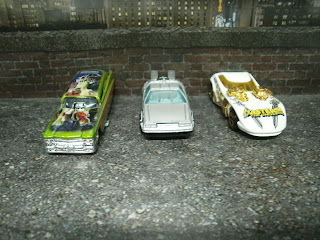 Email ThisBlogThis!Share to TwitterShare to FacebookShare to Pinterest
Labels: Back to the Future, Delorean, Hot Wheels