This is another one of my ebay purchases.  I got this because the seller was giving out shipping discounts for 3 items purchased together and I already had two gitd figures that I wanted.  Well, this was going for under $10, so I figured why not?  Besides, I just had Robocop week not so long ago and I did enjoy most of the figures. 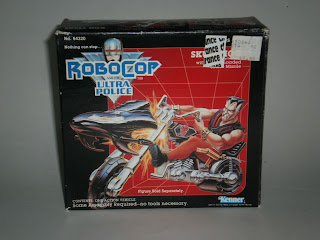 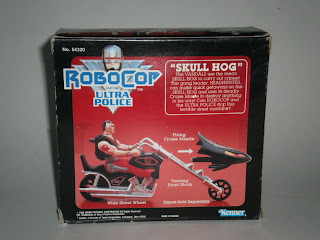 The box is a bit tattered, but hey, I'm not a MOC collector.  Logo up front, nice drawing of the vehicle with a character (and the obligatory "Figure not included" disclaimer).  The back has a bio of sorts and the details of the features.  The huge Robocop logo is still present though. 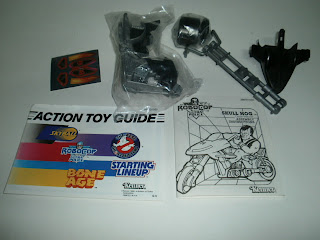 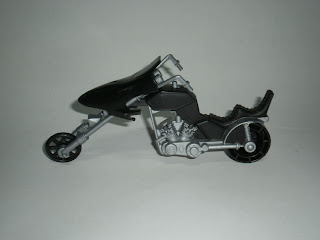 It's been a while since I opened up an 80s Kenner vehicle, and I was a bit surprised by the cardboard tray inside, although I shouldn't have been really.  The vehicle is mostly disassembled, but there's an instruction sheet and a decal sheet to go along with it.  There's also a Kenner 80s toy booklet inside. 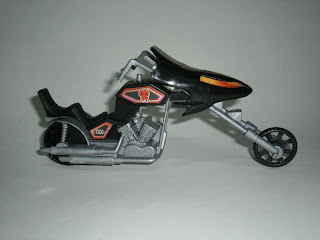 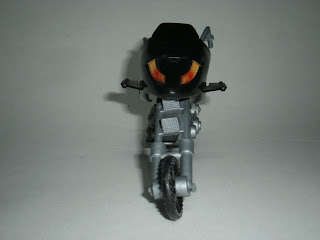 Putting the chopper together wasn't too much of a difficulty.  Applying the stickers was a bit more trickier, but I did it relatively easy.  I just hope I don't get peeling stickers in a few years time.  The stickers had to be applied because the chopper did look rather dull and drab without them. 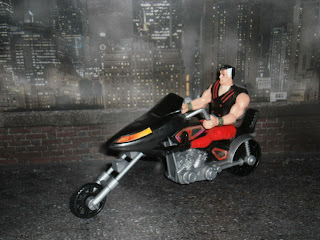 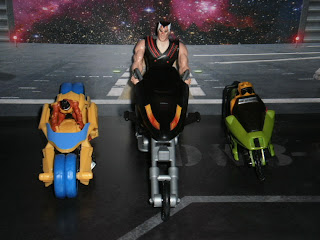 Look, I can even create the image on the front of the box with one of my two Robocop villians!  The cycle is huge and has one point of articulation at the front of the chopper for steering in addition to the wheels.  There's some details on the engine, but there's absolutely no paint at all, which is why the stickers are crucial for a splash of colour.  The firing windscreen is a bit weird as a concept, but it does work.  My only fault is that the figures lack leg articulation and so looks rather awkward sitting on the vehicle, but that's not the fault of the vehicle.  It's a nice little vehicle overall, although it's not that little though.
Posted by Novelty at 00:56