#537 of Year 2 Sectaurs Skito and Toxcid

As I always say, good things comes in twos.  Well, for the Sectaurs, they definitely come in twos as each pack has a figure and a creature.  The creatures are either steeds or accessories.  Yesterday's Trancula was a steed.  Today's Toxcid is an accessory. 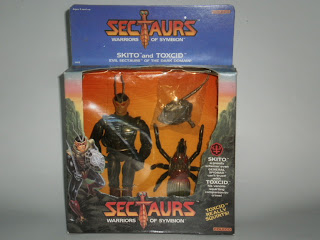 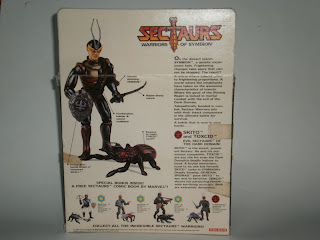 The box may look similar to Skulk's from yesterday, but thankfully it's smaller.  It's still beautifully painted though and looks amazing.  The inside cardboard tray could have been better than the boring orange, but that orange does ensure that the contents, which are mostly black, stand out.  The back of the box has the story, the bio, description of the action features and some of the other figures in the line. 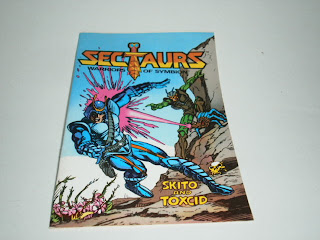 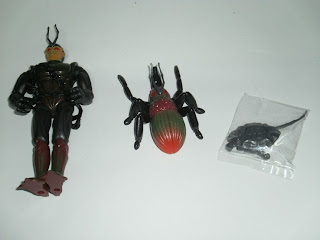 There's quite a lot of paper in the box, including the instruction sheet and a card about the club.  The main thing though is the Marvel-drawn minicomic, which seems tailored for the figure in this box.  The other (toy!) contents of the box includes the figure and the insect, as well as a baggie of accessories. 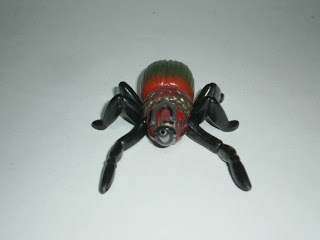 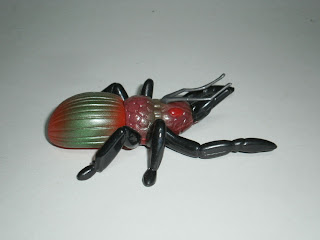 Toxcid is a one piece accessory, that's actually a disguised squeezy bulb.  He can sucked in water when his abdomen is pressed and released, and when the abdomen is full of water, pressing it will of course squirt it out through the probosis or snout of the spider.  The paint on the accessory almost makes it look lifelike, with the insectoid shiny green fading into the oranges and red.  Only the plastic-y look of hte legs and antenna betrays the fact that it's a toy. 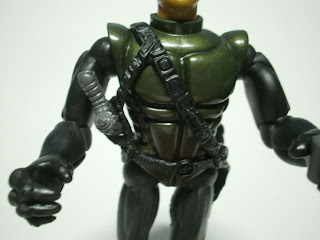 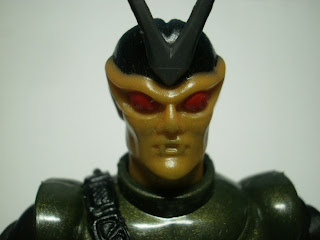 I have to say the figure is nice... and is much nicer looking than the figure from yesterday.  There's the same ball joints of course.  The elbows may seem to have articulation, but they don't, which is a pity (or they do, and I haven't got them to rotate maybe?).  The sculpt is spot on, with tiny incisors on the face.  The metallic sheen of the paintwork is nice and gives it the insect look.  The harness, sword, gun and shield were all inside the baggie, and the harness is very rubbery which allows it to be easily stretched and placed on the figure.  It also has storage spaces for everything... well, everything except the shield, but I'm gonna guess that can be stored on his back if push comes to shove. 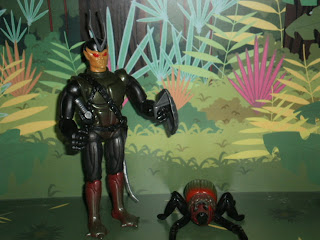 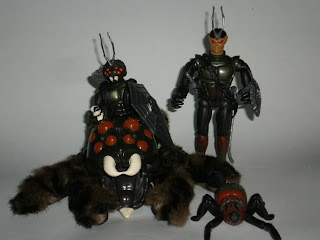 Overall, I like this figure.  Not so much the beetle thing.  He's a great addition to the line.  Now it's time for me to go read the comic!
Posted by Novelty at 00:04