It's Friday, and today I'm going with a two-pack for Toy Story week.  It's the cute and cuddly (OK, not), squeezy Aliens who first made their debut in the first Toy Story movie (You have been chosen!), and they've always been the fun characters and the comic relief of the entire franchise. 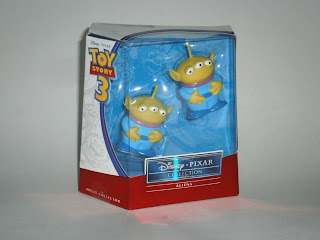 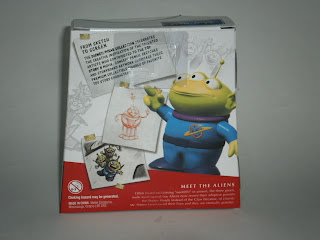 The box does not deviate from the general layout on the front, or the back, but the back is customised for these Aliens with the sketches of them in development.  I'm glad that the final product looks so much better than the initial sketches! 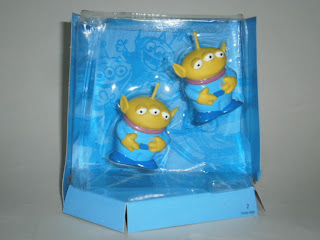 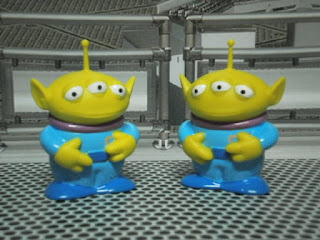 The Aliens are packaged in a clear tray on a blue cardboard tray.  The background on the blue tray is a lot more hillarious and it fills up the whole of the card.  The aliens themselves are boring, with no articulation points, like their real (movie) toy counterpart.  They do however, have the squeak when they are squeezed.  The paintwork looks great, but they feel a bit sticky in my hands.  The planet logo on their chest is partially obstructed by the sculpt, yet the paint there is still excellent. 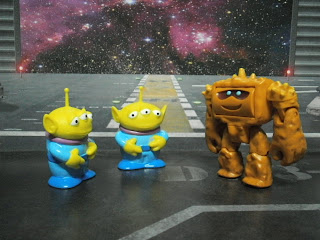 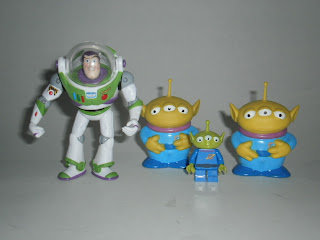 These Aliens are a bit big though - they are the same size as Chunk and Buzz, ofr instance.  I wish they were the same size as the Lego version of the character - that would have been perfect.  Oh and maybe some arm and neck articulation... or even bendy arms...
Posted by Novelty at 00:01