SPD is the Power Rangers in space "year"/theme and it seems to be some sort of Star Trek ripoff, or at least to me.  They toys though, are anything but Star Trek rip-off.  I only have one figure, and it's not even the basic figure, it's a delta morphin figure, whatever that is... 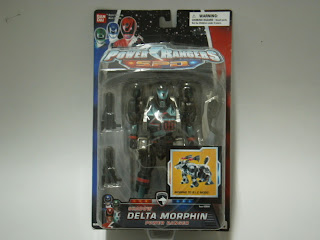 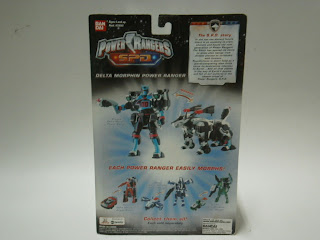 The packaging is simple, but still carries the usual Bandai elements.  The title is an inset inside the bubble and the title card contains the name as usual.  Like most other Power Rangers toys, the main rangers are shown on the top of the card.  That is a good move as they are usually colourful.  However, the contents in this case is anything but colourful.  The back of the card shows the figure and a number of other figures in the line as well as a short blurb about SPD. 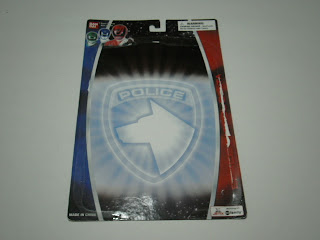 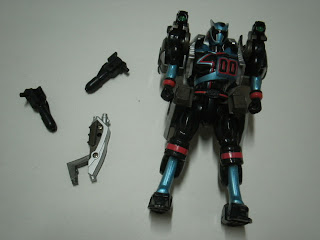 The front of the card has the logo behind the figure, which looks great.  The contents include the figure and three guns. 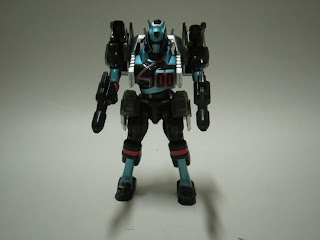 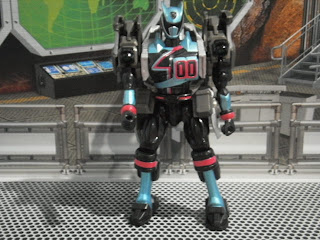 The figure looks rather block, and a huge part of it is the wolf backpack that he's wearing.   The lower legs are a bit skinny, again because of the action feature.  The figure, excluding the parts that aren't part of his human mode, has seven points of articulation, but lacks elbows or wrist articulation so he's a bit limited with poses.  The paintwork is nice with the red and silver and blue on the black standing out in a rather pleasing way.  The headsculpt is good, but it doesn't have any human features, so that's not too difficult. 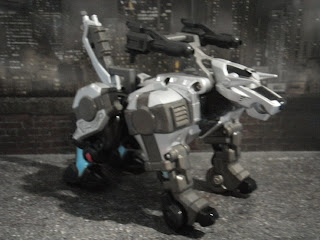 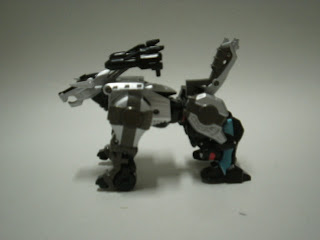 The transformation isn't too difficult since this is basically a "shellformer" - push the backpack over the body, shove in the arms and bend the legs and voila, instant wolf.  The wolf form is a lot less colourful, and is a lot more metallic silver.  The guns attaches to the harness and to the backside, with the latter forming the saddle and tail.  Yes, a power ranger could potentially ride on this wolf, which is a nice feature. 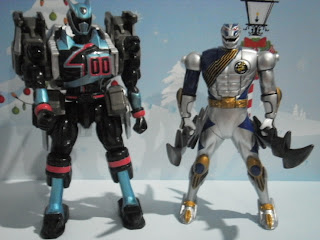 Overall, they tried their best to make this figure look good, and I have to give them points for efforts.  The transforming action feature isn't that great, but they did a good job transforming him into a beast which could be ridden.  Again, this is a figure that's optimised for play-value rather than looks or posability, and that's to be expected from the Power Rangers.
Posted by Novelty at 00:42