It's day 2 of Sea Quest week... and surprisingly it's a themed week in a non-themed month.  And despite the fact that it's only Tuesday, this is the third figure in Sea Quest week.  Yup, go figure ;)  And while talking about figures, here's the only female in the line... or at least female human in the line, despite the show having at least three females of note in the first season. 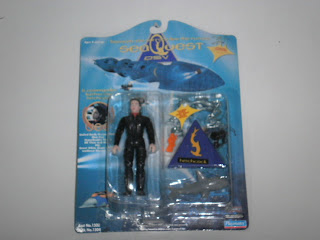 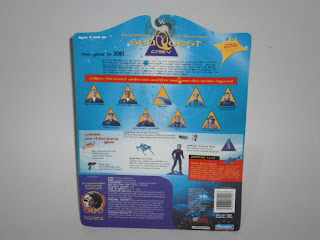 The card is similar to the other two that I've already opened, but this one doesn't have an ebay sticker.  Perhaps it fell off, but it does mean that the figure can be seen in her, uh, full glory... 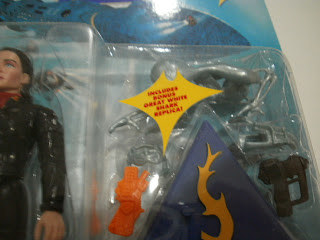 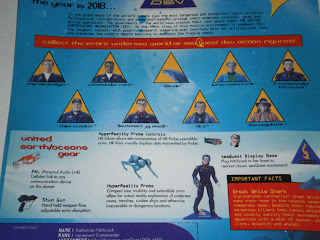 There's a sticker on the bubble on all the figures that shows off the action feature or one of the accessories.  Since Hitchcock doesn't have a firing weapon, her great white shark is mentioned, which is weird, as she has all her remote control ROV gear. 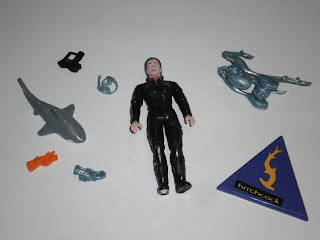 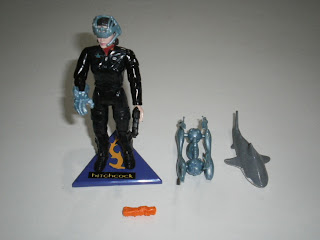 She does come with her headset and glove and the ROV thing - a hyper reality probe (say what?), in addition to the rubbery great white shark, an orange communicator and a black gun.  The communicator and the gun isn't anything special - sure it has some great details in the sculpt, but the one tone unpainted plastic is just boring.  The hyper reality gear is sculpted from a shiny metallic plastic and it does look interesting thanks to that.  More than that though, it's got details everywhere - and some rather fine detail at that.  The headset fits perfectly on her head and the glove on her hand.  The ROV probe could have been better if it had some articulation.  The shark does have a painted white underbelly, but other than that, it's just a great bath toy. 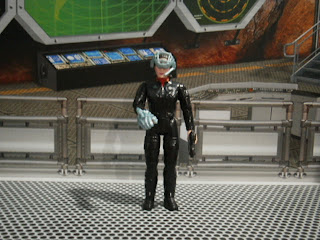 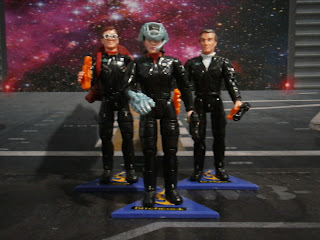 The figure is sculpted rather nicely (ahem!) and proportionately, such that her, uh, curves doesn't seem too excessive and out of proportion to the rest of her body.  There's quite a lot of detail on her "suit" and some of it is even painted, and painted rather nicely at that.  Her face sculpt is OK, and the paint there is passable, although the eyes could have been better.  She has the usual nine points of articulation found on the other figures in the line.

Overall, another solid figure, and although it's nothing exciting when compared to today's hyper-articulated, super-sculpted figures, this is still a rather nice figure for its
Posted by Novelty at 00:48