Some days I get hit with internet connection problems.  This week is one of those weeks, but as they say, the show must go on.  And goes on it does, with a Power Ranger today.  Now this long running line has been with us since the early nineties, and I must confess I know close to nothing about these toys. 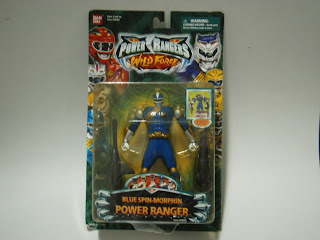 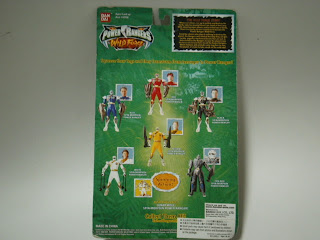 This is a blue Power Ranger in the Wild Force series or "year", as each year outside the first three or four years had a different theme.  The card is square and standard with the logo at the top flanked by pictures of the rangers, a bubble and a title card below.  The back of the card shows some of the other rangers in the line, as well as a blurb and quite a bit of text at the bottom. 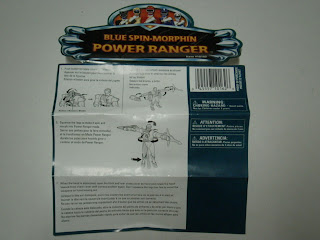 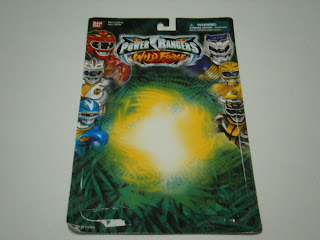 The title card actually folds out into the instruction sheet.  That's typical for Bandai.  The front of the cardback is nicely illustrated - they could have gone for a blank look, but instead there's this blob of energy amidst a Jungle looking backdrop. 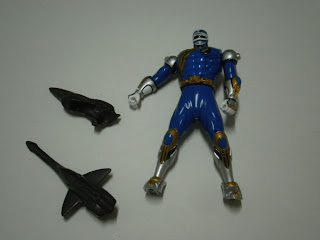 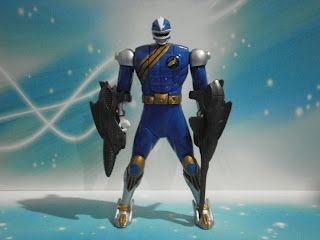 The character comes with two odd weapons which attaches to the hands of the ranger.  The weapons are sculpted with some detail, but it's moulded from black plastic and not a lot of the details are visible. 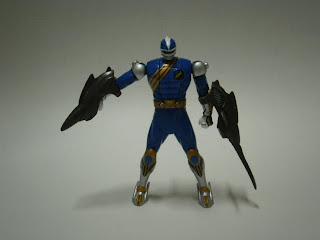 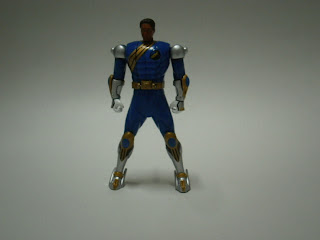 The figure has only four points of articulation - hinged shoulders, twist waist and one hinged hip.  The hinged hip, when pressed, turns the waist around and opens the figure's chest and back, allowing the human head to swing back into the chest cavity and the ranger head to swing out.  That's two action features.  The head swap can also be carried out when the button on his back is preseed.  However, because of the action feature, the articulation is very limited.  Nevertheless, despite the lack of articulation, the figure has a huge degree of "fun" thanks to the action feature. 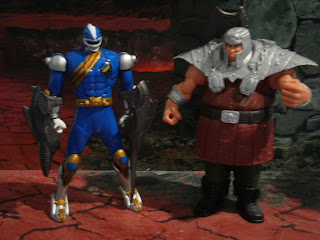 The paint on my figure is good, but most of it is tampographed on anyways.  The sculpt looks good - even the human head seems to look human, but I've no idea how closely he resembles the actor who plays him.  Overall, this is a nice figure, but it's not targetted at collectors, so don't expect too much from it if you do pick it up.  Expect it to be fun though, because it is fun.
Posted by Novelty at 00:15