It's still Sea Quest week, and this is the last of the men in black.  Out of the 9 figures in the line, more than half of them, five, are in the black uniform, and over the past week or so, I've been showcasing them here as part of Sea Quest week. 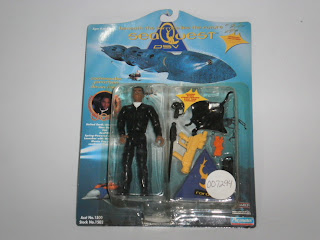 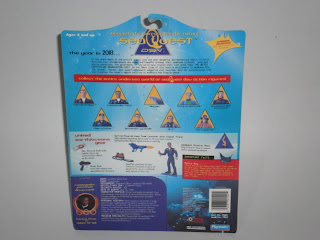 The card, well, it looks pretty much the same as the other four.  This one is a bit bent though.  And yes, that's the ebay sticker with the lot number on it. 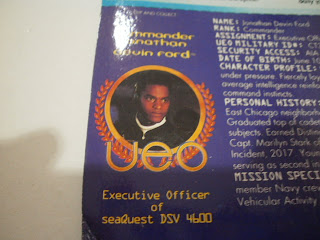 I have to say, the photos that they use on the roundel on the front and the back, well, almost all of them could have been better.  This one could have benefitted from a smile. 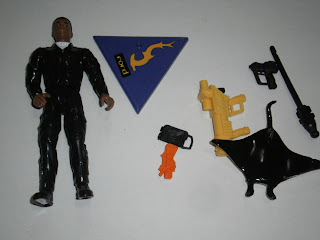 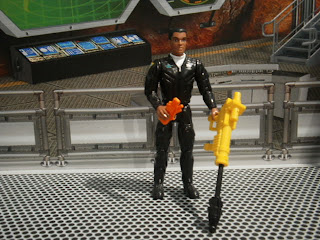 The figure has the usual black uniform with 9 points of articulation.  Yes, there's quite a bit of sculpt details on the uniform, but thanks to the black colour, it doesn't really show up.  The face sculpt is good, but the figure looks more like Kwarme from Captain Planet than Jonathan Ford.  Besides the figure, there's another spring-loaded gun with black misssile, orange communicator, black gun, black watchamacallit, stand and a rubbery manta ray. 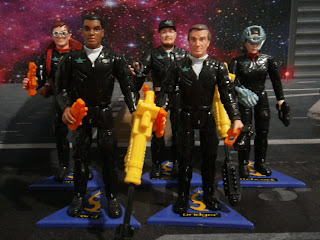 Well, that's not the full crew of the Sea Quest DSV, but that's all that Playmates produced as toys.  I think they look like a rather tight crew and the black uniforms really make them seem a lot more cohesive and professional.  It's a pity that the orange communicators and the yellow gun spoils the effect, but this is Playmates after all.
Posted by Novelty at 00:49