Good things comes in twos.  Two Aprils in April, and two Foot Soldiers after that, one for each April I opened.  Hey, I'm a fan of symmetry... I guess... 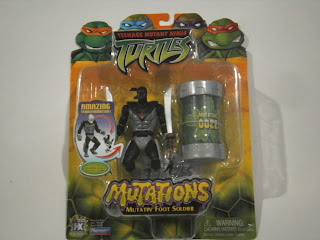 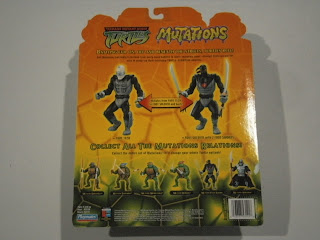 This Foot Soldier came on a similar card to the Foot Soldier from yesterday, but the card is half again aas wide.  The turtles are still on the top of the card, but the cards has been cut so that there is no "background" to the turtles.  The logo has moved back to the top, but in front of the bubble, and there's a new Mutations logo as part of the title card.  The name of the character is clearly printed on the title card.  In addition, there's a picture of the character on the front, his "alt mode".  The back shows both versions of this Foot Soldier, but the bio is nowhere to be seen. 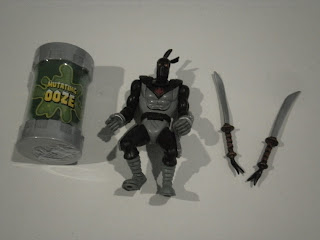 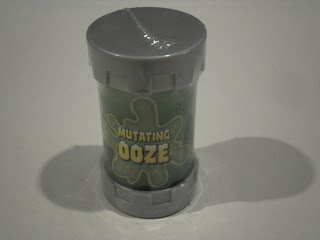 This foot soldier comes with two blades, and a tub of ooze.  Yay, slime!  The container is shaped to resemble an actual container of ooze from the cartoon.  I didn't want to open it up, because it'll probably dry out if I do.  Still, this is a good source of Slime and I can't wait to put it through its paces in Slime Pit. 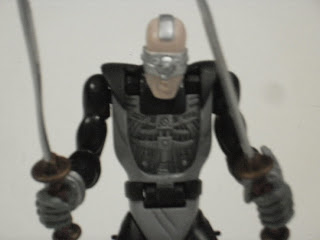 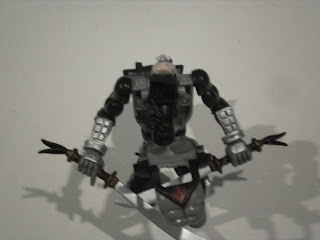 The figure is a bit skinny, and the leg is sculpted so that it's a bit bowed.   There's no knee articulation, so  that's going to be an issue.  There's quite a lot of details in the sculpt though, including the electrical wiring on the chest.  The paintwork is good and borders on exceptional. 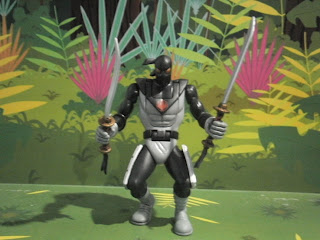 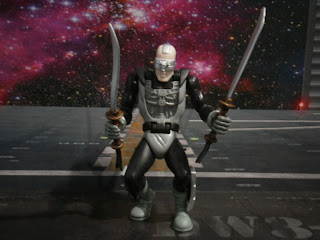 The chest and back can be opened and the head rotated so that it can transform from hooded figure to one-eyed cyclops.  That's a fun action feature as even the chest plate (which is very rubbery) can be flipped to change his complete appearance.  Thanks to the action feature, the figure looks completely different in both modes. 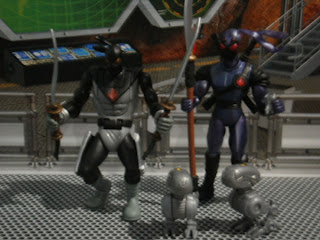 The legs is where this figure suffers some, but otherwise, it's a rather nice figure.  It's got even more play value than the Foot Soldier from yesterday thanks to its transforming mutating gimmick.  And the awesome overall clean look is just a bonus.
Posted by Novelty at 00:19