Wow, I'm at #302.  Almost there!  I can't wait to get to the end of the year.  I pass over Morticia in Femme February because even then, I knew I wanted her and the rest of her family for Monster October.  Welcome to Toy a Day, and if you're reading this for the first time, I'm opening a toy for each day of the year, and I'm trying to do that in themed months.  This Halloween (extended) weekend, I've decided to open my collection of 4 Addams Family figures, and today's figure is Morticia. 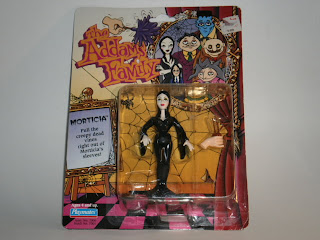 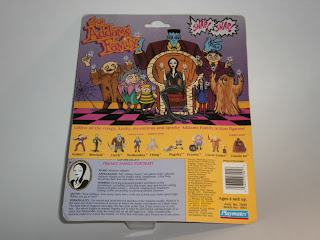 Morticia is Gomez's wife, and she's a huge plant freak.  The card is similar to Gomez's but modified for Morticia.  Again her action feature is described on the front of the card, and there's a long long bio on the back.  Morticia is from the first series of 6 figures, with 3 more shown on the back of the card as "Coming Soon", presumably the seond wave. 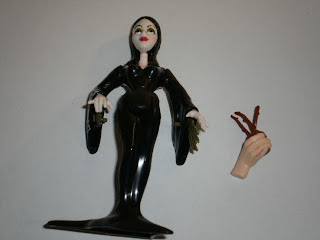 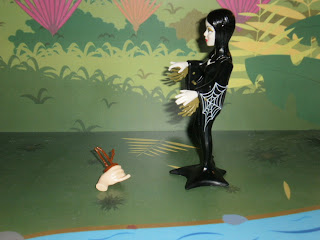 There isn't much for this figure, just the figure herself and Thing.  The figure is moulded from black plastic and seems to be made of 3 pieces the two arms and the rest of the figure.  She is made from a few more than 3 pieces actually.  She only has 4 points of articulation - the two shoulders, the twist waist and a bendy joint at the hips.  Her action feature is that she can make plats shoot from her sleeves, but the plants are creepy and reminds me of armpit hair.  Eeewww.  The paintwork is good, and the tampographed cobwebs on her sleeves are well done.

The Thing that comes with her holds some wooden shoots, and fits in with her theme.  The accessory is moulded from brown plastic, with Thing painted in flesh.  It also stands rather well on its own. 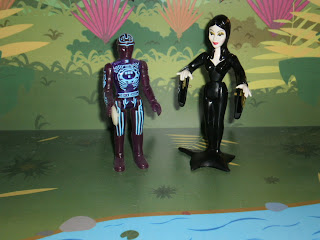 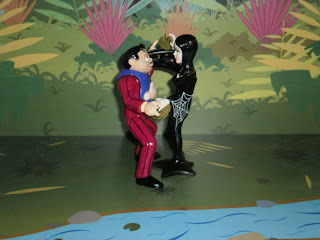 Unlike her husband Gomez from yesterday, Morticia seems to be a letdown due to the lack of articulation (well, a lot less than usual) and accessories (only one).  The figure should also be a lot taller than Gomez.  The bright point is that at least her accessory is not a gnarish colour!
Posted by Novelty at 00:39