Howdy y'all.  It's Swamp Thing week here on Toy a Day, the first themed week of Monster October, and I'm excited today because finally, FINALLY, we have got to the monsters.  The monsters are the best part of this line, IMO and all, and I can't wait to open them.  Today's figure, the good (or bad) Dr. Daemo. 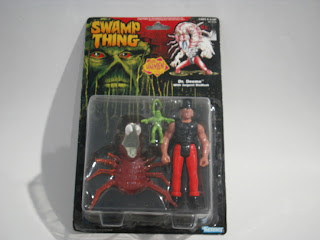 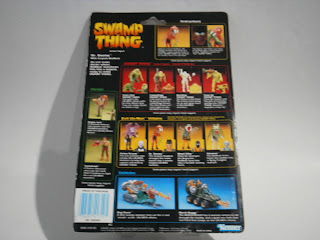 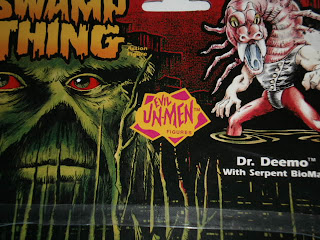 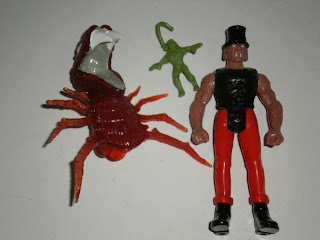 There are three pieces out of the bubble - Dr. Daemo himself, a Swamp Thing voodoo doll and the insect mask thing.  There is nothing to wrting about the figure - it's mainly an unpainted figure, with the usual 5 points of articulation and there's some sculpting detail, but not much on it.  The part of the figure with the most work (sculpt work that is) is the face, and the toy is produced with the details rather nicely reproduced.  The paint that is used to highlight the eyes and teeth gitd, although they are such small pinpricks of faint light in the dark that they are almost invisible. 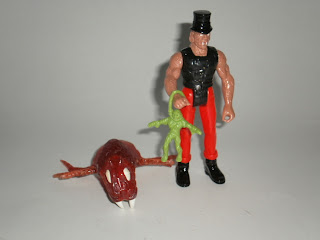 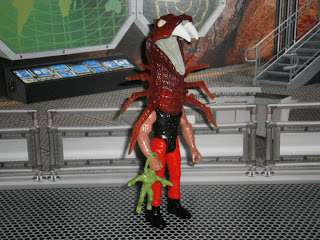 The Swamp Thing voodoo doll actually has more detail in the sculpt than the main figure, but it does not have any articulation or paint.  It hangs off Dr. Daemo's wrist rather limply, almost like a ladies' handbag.

The millipede mask thing is made of translucent rubbery plastic and is painted with gitd paint for the eyes and white paint for the fangs and mouth.  The sculpt is again excellent, but as there is no paint on the translucent material, it's not very visible.  The one complaint I have about the mask is that it doesn't sit too well on the figure - the internals of the mask pushes off the tophat of the figure and it comes off with a rather loud pop after a while. 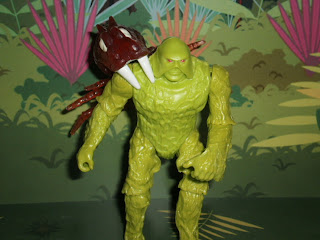 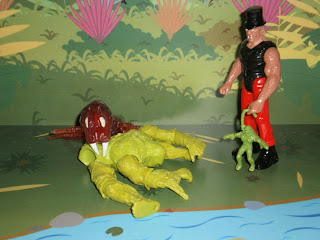 Despite that little flaw - and it is fixable by rotating Daemo's head such that he looks over either of his shoulders - this toy is rather playable.  The addition of the mask transforms this from one figure into two figures, or three, if the mini-me handbag is also counted as a figure.
Posted by Novelty at 00:25