We cap off Monster October with the Addams Family... and we start off with the man himself, Gomez!  Now Gomez should need no introduction - he's after all the head of the household, and has a penchant for duelling, dancing and deadpan humour. 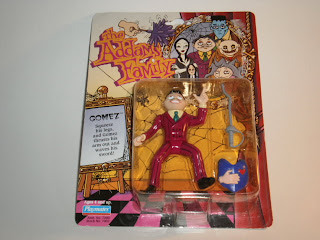 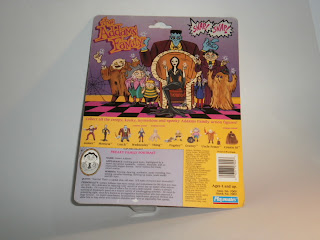 Gomez comes on a rather busy card, but that makes it looks good.  The back of the card features a huge picture of the family with their trademarked finger snapping and the Snap Snap.  The middle row of the card shows the figures in the line, and this acts almost as if it's a divider.  The bio is found on the bottom of the card.  The figure is in the usual Playmates all clear wraparound bubble, and it displays the contents, including the accessories well. 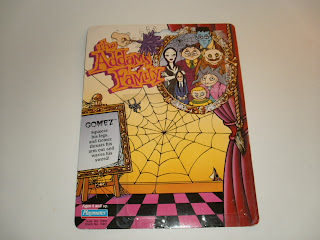 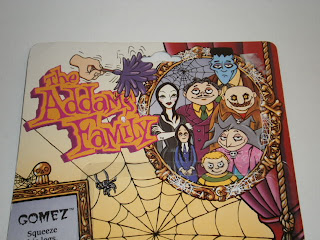 The front of the card is busy, but it looks great from the spiderweb design behind the figure to the pink and black checkerboard floor.  There's a nice portrait of the family on the top left of the card, with the logo to the left of it.  The name of the figure is shown on a framed board on a tripod easel, but Playmates tops it off by describing the action feature of the figure beneath the character name. 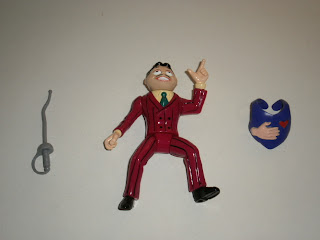 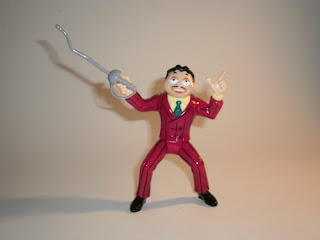 Out of the bubble, the figure seems rather sparse by today's standards.  However, it involves a sea change from Playmates usual philosophy.  The weapons are moulded in an appropriate colour, so we get a grey sabre instead of a pink or cyan or olive version.  The vest is moulded from a nice blue plastic with the heart and Thing painted on in red and flesh respectively.

The choice of the magenta for Gomez's suit is inspired, as it makes the figure stand out a lot more than he would have.  The sculpting is excellent as can be expected from Playmates.  The paintwork is also good, with no slop anywhere.  The face is painted in such a way to give Gomez a crazed expression... and like yesterday's figure, Jack, there are pinstripes on the suit, although the lines are not as fine as Jack's. 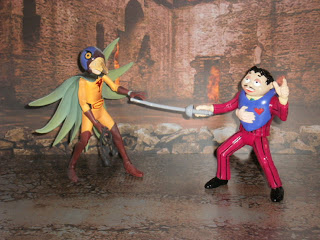 The figure has six points of articulation - hips, waist, shoulders and neck, although the hips and waist articulation is limited by the action feature.  The fixed pose of the figure could also be an issue for some.

Overall, Playmates seems to have learnt a lot from their past lines.  Gone are the gnarish coloured accessories that was prevalent in the Star Trek line.  The paintwork and the sculpt is a lot more refined than the Dick Tracey figures, with unnoticable slop and proportionate body proportions.  If the other figures of the line keep to this standard, I'd say this is the second best line that Playmates offered, after the WildCATs.
Posted by Novelty at 00:54