It's a new week, and I'd like to have done a Muppets week, but since I barely have enough figures for half a week, well, I have to make do with what I have.  When life gives me a prawn, I make a Pepe out of it!  And why is this here?  Because I was once told that Muppets give some people the creeps.  Welcome to Monster October! 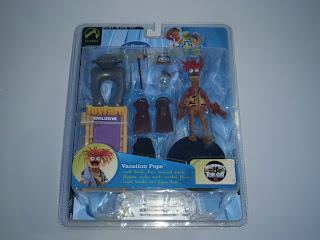 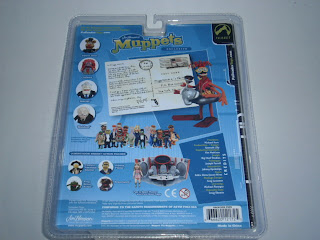 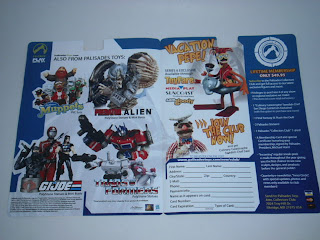 The front of the "card"back is simple, and has the usual Muppet logo.  I have no idea if that's reused for the other figures.  Maybe it is.  However, the card is not really a card.  It's a leaflet and it folds out to reveal all sorts of stuff in the middle.  That's something novel that I've not seen ever. 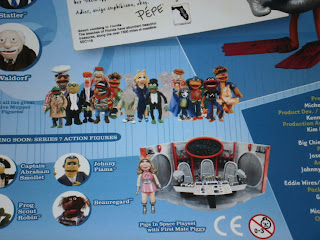 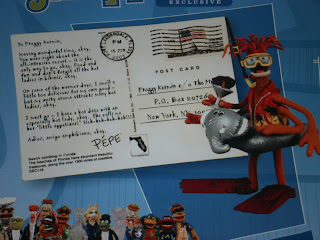 The back, of course, has the other figures in the line, and some of the playsets.  What's good is not the to scale picture of Pepe, but that his "story" is told on a postcard.  That pretty much sums up the atmosphere of the figure. 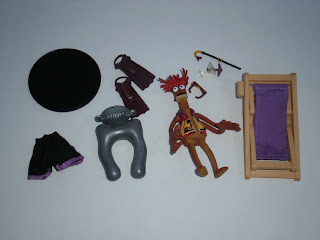 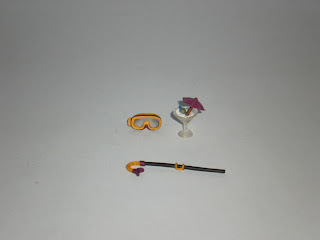 The accessories fit the figure like a glove... or like a pair of diving goggles, an elephant floater and a pair of swimfins.  I had concerns that Pepe's feet will not fit into the hard plastic opening of the footwear, but my fears were unfounded.  The rubbery elephant grips Pepe's groin rather well and gives him a rather obscene look, which I'm going to guess is the intention.  The eyewear fits the face sculpt so well that it will not come off during play. 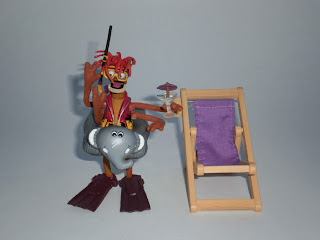 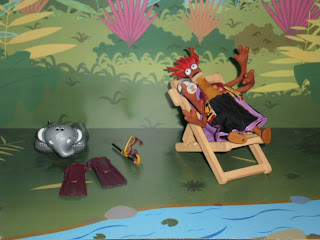 The figure only has 5 points of articulation - four on the shoulders and the neck.  The range of movement is limited.  The legs appear to have joints on first glance, but can't move much at all.  Because of that, Pepe can't really sit in his chair.  The upper hands are sculpted so that he can hold the umbrella cocktail glass, and the head details are great.  Again, because of the size, the paintwork, especially where it's hidden by the hawaiian shirt is a bit sloppy.  There was also some dried adhesive on my figure as well, where the hawaiian shirt is stuck to the figure's back.

I'd give this figure A for effort, C for execution and D for articulation.  This is a figure that was made about the same time as the millennium He-Man stuff, and although these look great, the final product seems a bit off to me.
Posted by Novelty at 20:22