Transformers Animated week for this year's Mecha March might have ended, but that doesn't mean that the opening of Transformers toys have ended. The toy today is another Japanese import - Cybertron mode Bumblebee from TakaraTomy's Transformers United line. 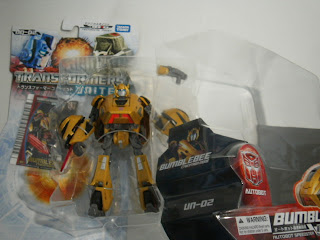 Yup, the image above should have clued you to where it's at.  Since this is an "insect" related post, and this is Bumblebee after all, it's over at the Killer B Hive as part of the now defunct Blog Mash Bash.  But hey, it's the first time this year that BMB has been done, so yay!
Posted by Novelty at 14:35