I'm still running through Transformers Animated week here on Toy a Day as part of Mecha March.  Unlike the former Transformers Animated week way back in August last year, this year, the toys are mainly the Japanese toys from TakaraTomy.  The difference is that the paint schemes are slightly different, with brighter metallic colours on the Japanese toys. 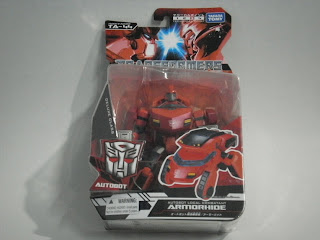 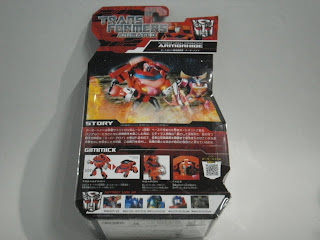 The shape of the Japansese TFA card is similar to the Hasbro one, but the design elements is completely different.  There's a more manga feel to the image above the bubble and the Transformers autobot insignia is a lot let cartoony.  The robot mode is displayed in the bubble and the vehicle mode is pictured on the front.  The back has a similar design to that on the box of Wingblade Prime, including a very nicely painted picture of Armorhide, as he's known in Japan, and Rodimus. 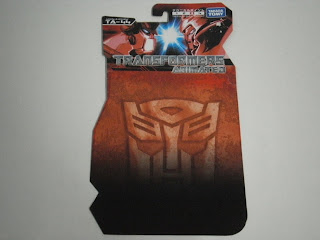 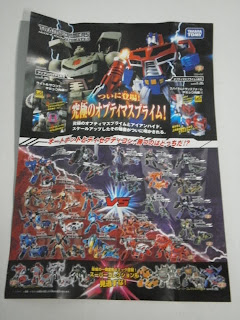 The card behind the bubble has a very interesting design with a rusty look in the colours.  As usual, besides the instruction sheet and the card sized sheet, there's a leaflet which folds out to show all the toys in the line.  There's no trading card with this figure though, which is a bit weird. 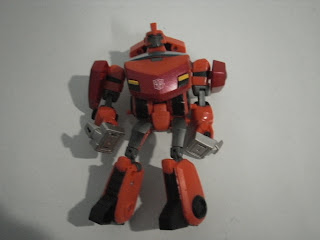 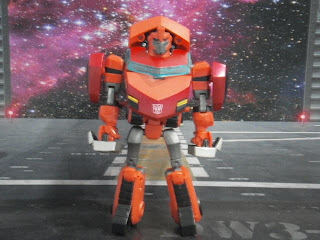 The figure is basically a repainted Cybertron mode Ratchet with a new head.  The sculpt is clunky, but that's how Transformers are supposed to be, as opposed to being a pile of junk.  The bakcpack seems like a weird piece of kibble on Ironhide.  He comes with what seems to be a set of defibrillator pads, probably a leftover from Ratchet. 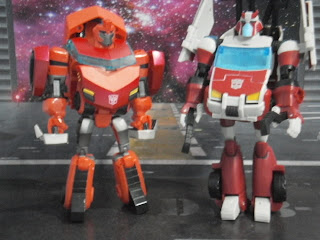 Of course, this model looks nothing like the Earth-mode Ratchet, and it is nice for the two toy companies to give us a figure for Ironhide. 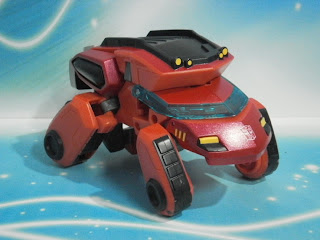 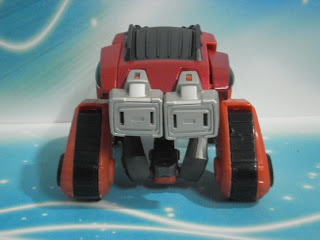 The transformation to tank is relatively straightforward, although there are a few surprises in store.  Everything clips together really well and it's a sturdy vehicle.  Even the defibrillator pads clip on securely to the rear of the vehicle. 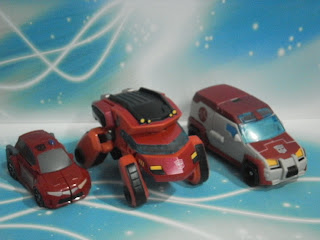 Ironhide is a nice repaint at the end of the day.  The colours on the Japanese version are a lot brighter and closer to red which makes him fit in very well with vehicles such as Cliffjumper and Ratchet.  This is a nice Transformers and a great addition to the line.
Posted by Novelty at 00:15