It's still Transformers Animated week here on Toy a Day as part of Mecha March.  I'm surprised by the amount of chatter that's going up this week about the TFA... from where to order them online to Arcee's thumbs being broken.  I continue today with Ninjabot, aka Samurai Prowl.  That's Prowl with Yoketron's helmet.  Basically, in the cartoon, Lockdown, who's a packrat has a spare Yoketron helmet lying around so he gave it to Prowl to team up or something like that. 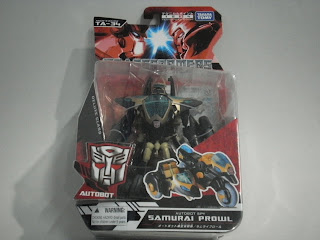 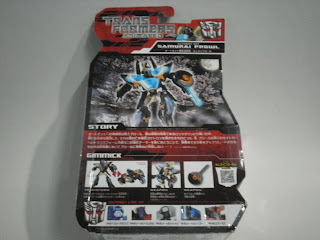 Prowl comes on the standard TFA Japanese card that's no different from everything else.  The only clue that it's a different character is the title card with the vehicle mode of Prowl, and of course, Prowl himself who's displayed inside the bubble.  The back of the card has a rather interesting picture taking up most of the card, but otherwise, it's the usual story in terms of Story, Gimmick and the Cross-sell. 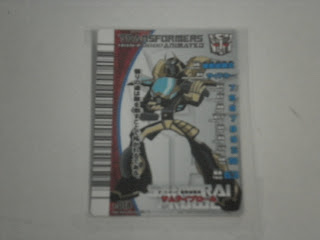 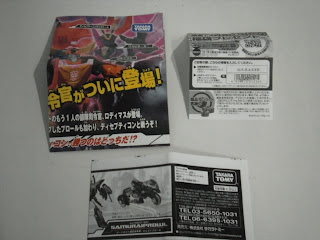 Prowl comes with the usual Japanese trading card, as well as the sheet with all the Japanese TFAs to date.  As usual, there's more 'paper' inside the bubble than a standard Hasbro toy. 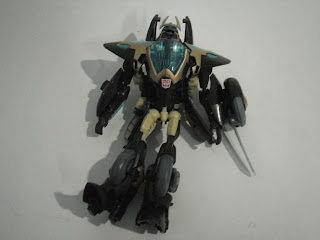 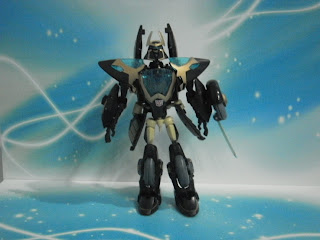 At first glance he seems to be just one piece, but in reality, he's made of two pieces.  The srticulation is plentiful, but the ball joints are a bit loose and fly off when the least amount of pressure is applied.  Of course, they can be snapped back easily, but it's a bit annoying.  The figure is also top heavy because of all the things going on above the waist.  Also, having a waist that's even thinner than Barbie's doesn't help him in this regard.  The paintwork is good, but I wished the gold was a bit more yellow so that he'd pop out on display.  As he is, he seems to hide well in the background... but then again, that's Prowl's schtick. 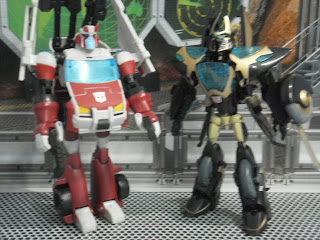 Prowl is a tall figure, standing almost as tall as Ratchet and seems to fit in well with Ratchet in robot mode.  There's not much kibble left over, what with the clever use of wheels on his legs, although the wheel weapon on his hand seems a bit weird. 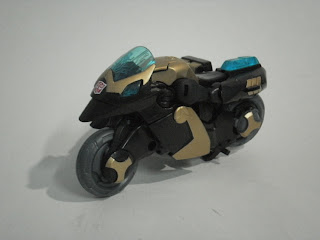 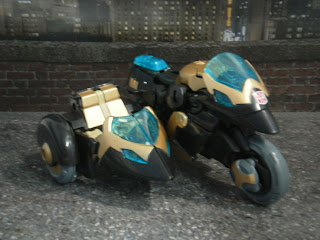 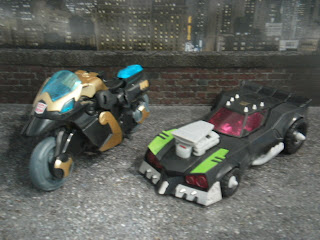 The bike mode is also a lot bigger than he's supposed to be - compare him with Lockdown, for instance, and then image a human walking out from Lockdown's driver's seat and trying to climb up onto Prowl.  It just doesn't work.

Still, Prowl is a good figure and looks great in robot mode.  The plus here is that he could be plain Prowl, or he could be accessorised with the sidecard/backpack to be the Ninjabot.  He's definitely going on display as the Ninjabot.
Posted by Novelty at 00:15