It was December.  I was trolling the streets of Hong Kong hunting for toy bargains.  And then I noticed this toy grotto place, apparently recently opened, and all it had was cheaply made Chinese toys.  Then I caught the sight of Japanese text... what's this?  Revoltech?  And that was my introduction to the line.  Out of all the cheap plastic in the store, this section of the aisle (there were no shelves) had these Japanese toys which looks interesting.  And for a couple of bucks (US, not Hong Kong), was this large box of accessories with an interesting looking speeder-bike-like gun. 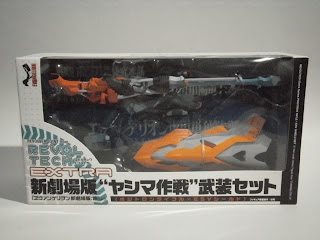 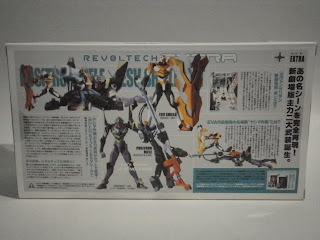 So I purchased this for what to me was pittiance, and it just sat there until recently, of course, when I opened it.  The box is a lot bigger than the Yamaguchi boxes, and it's apparently an "Extra" instead of a proper Yamaguchi.  The shield and the gun is visible through the window, and that was what attracted me to this.  The back of the box is very wordy (and it's mostly Japanese), but it does have some nice pictures of how the robots could use these accessories. 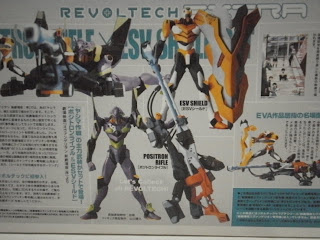 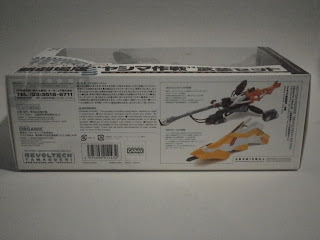 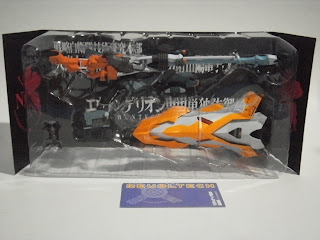 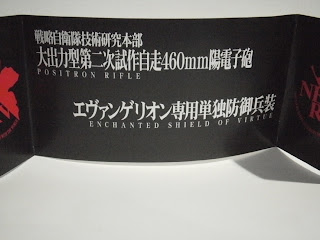 The insides has the accessories tied into the tray, but they were easy to remove.  What I found interesting is that the names of the two accessories are written out in Japanese, Chinese and English on the card that holds the tray together. 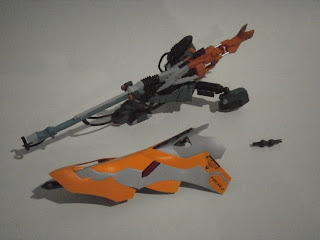 There's just three pieces out of the box, the shield, the gun and a double-hinged Revoltech double-ball joint. 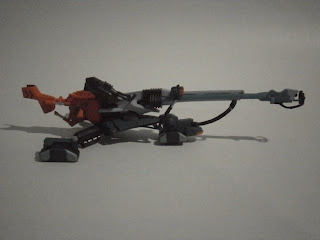 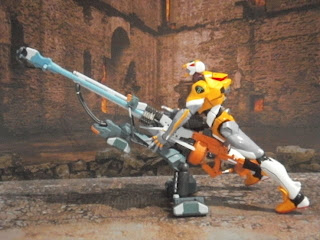 The gun actually has legs that are articulated, and there are five points of articulation on the gun, four of them on the legs.  It is sculpted with a lot of details, and the paintwork is used to highlight those details.  The paint is good with hardly any slop, so this thing can't really be a factory reject.  The gun is huge - it's longer than Evengelion Prototype is tall, so that's a good thing.  And it looks really great on display. 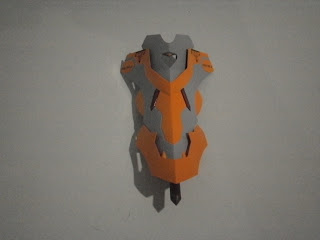 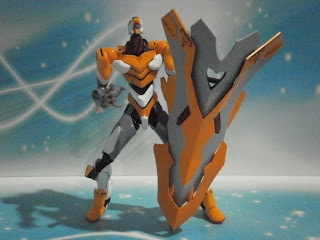 The shield is a lot more simple by comparison, with one point of articulation on the main handle.  There are three other handles though, which means the shield can be held in a variety of ways... once you figure out which hands actually can hold the shields!  The main shield is formed from one piece of grey plastic, and the paintwork on it is so excellent that at first I thought they were two separate pieces of plastic held together in a celtic puzzle sort of way.  Well, that proved not to be the case.  On its own, the shield is boring, but placed next to Evangelion prototype, wowzah!  Now I have to start making space on my shelf to display this...
Posted by Novelty at 12:01