2012 is going to be a bumper year for MotUC.  That's because Mattel is celebrating the 30th anniversary of the line.  Hooray. 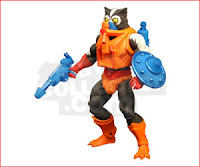 Whew, that's a good line up.  So what do I want to see for the second half of the year?  In no particular order:

1. At least three Princess of Power characters, with at least 2 from this list: Frosta, Glimmer, Angella, Madame Razz, Broom, Kowl, Light Hope.  We seriously need the core members of the Great Rebellion and these seems to be the figures most in demand.  I'd like Peekablue and Castaspella and Sea Hawk as well, but those are really optional when compared with the core list.

2. One more Galactic Guardian from NA and either a NA He-Man or NA Skeletor.  We've been promised an all inclusive line and so far we only have two New Adventure characters out of a possible 30 (realistically) or so?  They really need to step up and give us more NA characters to balance things out.

3. More nods to the MYP design book.  Again, this has been hailed as the all inclusive line, yet we never got extra heads for Sy-Klone or Clawful or Buzz-Off.  OK, Fisto can be displayed both ways, and that's good.

4. No more cheapening out on the Quarterly Variants.  Snake Man-At-Arms seems a lot cheaper and not is not really a must have for the fans.  When the line started, we were promised that there would be no variants that would not make sense.  Well, this version of Man-At-Arms doesn't really make any sense since he was never shown in that guise in any of the media up to this point.  Yes, I know the mini-comic will show him as such, but an entire reissue when all he needs is a new head?  Really?

5. A brand new Snakemen from the 30th anniversary line.  There is a shortage of figures for that faction and it would be great to get another one to swell up the ranks.  Sure, there's King Hiss' slave girl, but she's not being made any time soon.  And of course, Vipra is still off the table.

6. Mantenna... or Dragstor... or another vintage Horde member.  They've been parading one Horde figure in the second half of the year for a few years in a row.  We do need Mantenna to complete the original four Horde figures, but I wouldn't mind if they hold him back for 2013.  Dragstor (with a spinning wheel please) would be a superb figure in his place, but I guess Mosquitor would also be good.

8. More stand alone accessories.  OK, we are getting the Snake Mountain stands, but will we get another Weapons Pak this year?  It would be great if that was on offer.  We'd also like a heads pack as well, but I doubt we'll get those this year.

9. Geoff John's figure not to have anything to do with DC comics.  He needs to wow us, so hopefully he'll be able to dig deep within the mythos and produce a character to wow us, just like what the Four Horsemen has done with Draego-Man.

10. DVD releases of the entire MotU, PoP and NA library as a collector's set.  This would truely tie-in the entire mythos into one universe.  And while they are doing that, how about a trade paperback of the vintage MotU, PoP and NA minicomics.  This should be a no brainer as well.  Mattel should have all the rights to these, and there are some rather big names on some of these.

11. No more QA/QC issues.  I don't want to read about reversed shoulders or limbs, or exploding body parts next year.  We are paying at least $20 for a toy.  Please make sure that it meets the quality expected of it.

12. A fully functional online sale site that does not give the users any grief.  How hard is it to do that when the online Mattel shop does that wonderfully?