Well, she was originally scheduled for Anniversary April, but I have decided to reserve her for Femme week, which had to coincide with me getting Evil Lyn, which will be in the first week of MotU May.  Hmm...
But if you were going to read about her here, well, I have to apologize, because she's not here.  Her review is guesting on my new found friend and blogger Wes Grogan's blog, Is It Fun . net  I have no idea when Wes will get it up, but I hope it'll be soon.  Anyways, here she is on the temporary shelf allocated to the Millennium line.  It's getting a bit crowded there, but they will all go back into the box soon! 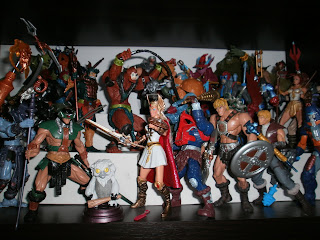 Edit: It's now up at Is It Fun. Enjoy the read!  And welcome to Femme week and MotU May!

Edit: Well, Is It Fun? is suspended.  Here's the original review.

She-Ra was the twin of He-Man, or rather her alternate ego Adora was the twin of Prince Adam. She’s the star of her own Cartoon series back in the mid 1980s as well as her own toyline, the Princess of Power. When the line was “rebooted” for the new millennium, She-Ra did not make the “reboot”. But she did make it as an action figure in the Millennium Masters of the Universe line. 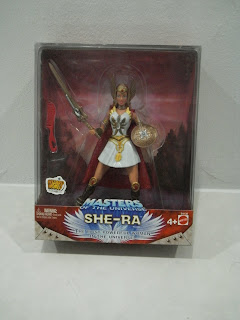 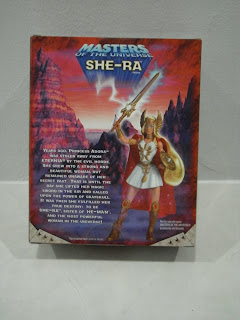 She-Ra was the 2004 Wizard World Chicago exclusive toy by Mattel. Being an exclusive, she wasn’t sold en mass in stores, so she wasn’t widely available to the public. She’s packaged in a box instead of on a card, which was the norm for the Masters of the Universe exclusives of that time. The font of the box is mostly clear plastic, so that the toy is visible – only her feet is covered by the title card. The back features a photograph of the toy as well as her bio.

The amazing thing about the packaging though is not the box, but the cardboard tray inside the box that forms the backdrop for the figure. Instead of a normal boring plain colour tray, this tray has a nice painted background. Thanks to the clear plastic front of the box, this tray is visible in its full glory even when the box is unopened. 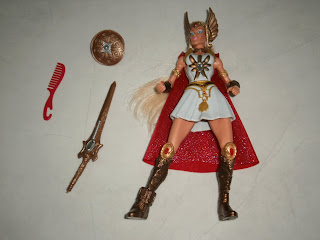 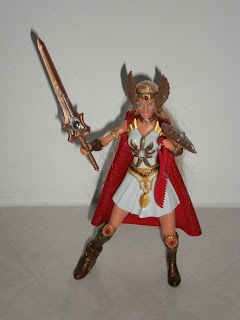 The figure comes with a sword, a shield and a comb. The comb is a nod to the classic figure, which also has a comb. The sword and shield are golden, again, a reference to her classic sword and shield. There’s a nice jewel in the gold sword which can be held by either hand. The shield clips securely to the figure’s hand. 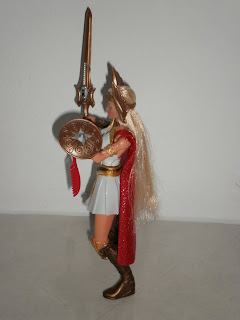 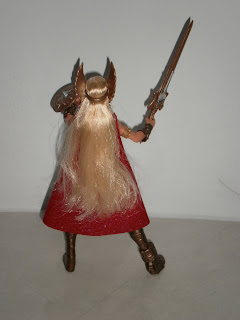 Like her classic figure, this She-Ra has barbie-like hair. Her tresses can be combed with the supplied comb or plaited or permed or whatever little girls (and some boys) do to hair on dolls. Her cape is also nicely done – Mattel could have gone with a clear red plastic, but instead included glitter on the cape, which I’m sure will attract little girls (and some boys too…) 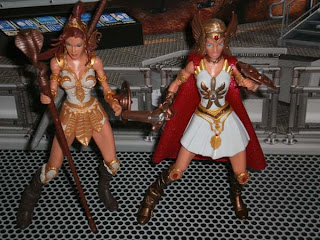 And in Toy a Day fashion, let’s do some comparisons. Let’s start with the Millennium Teela. Notice anything similar about the two figures? Yes, She-Ra is a “repaint” of the Millennium Teela, with a new head and dress. The arms and legs and even the shield are exactly the same as Teela. The fixed pose is also the same as Teela, although I must say that they must have fixed some balance issue, because She-Ra could actually stand on her own, while Teela tends to fall on her face. 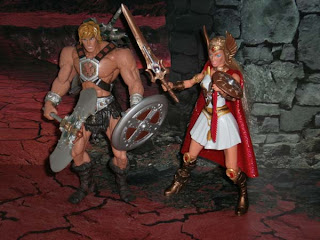 When placed next to the Millennium He-Man, She-Ra seems very much in scale. That shouldn’t be a surprise since after all they are in the same line and she’s a Teela repaint, more or less. However, she’s less anime-influenced than He-man, which adds that little bit of oddity there. Also, the rooted hair doesn’t go with the french-fries-as-hair on He-man, but that’s my slight complaint. 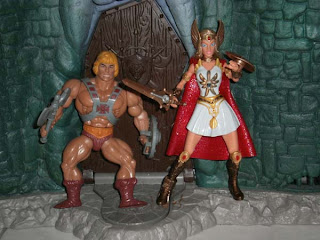 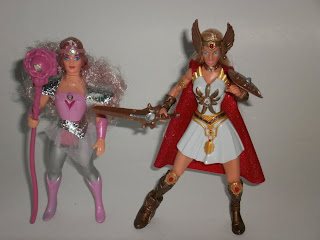 I don’t have a classic She-Ra to compare her to, so I’ll have to make do with the only classic Princess of Power figure I have (recently opened in January as part of Toy a Day) – Glimmer. Surprisingly, the two of them seems to go rather well together in terms of looks (both have rooted hair, both have fixed poses), height (they are about the same height), colours (both are garish!), and gender (both are females). The main reason is that the Millennium figure, although a repaint of the millennium Teela, nevertheless retains the key qualities of the classic She-Ra and thus is very true to the figure. Hence, the almost compatibility with the Princess of Power line.

So, if this was Toy a Day, the blog post would have ended here, but obviously, this is a guest slot, so what’s my final verdict? Let’s see, she’s a repaint, she has a fixed pose, she’s targeted to girls (editor’s note: and some boys), she’s in a line that I’m not fond of… I guess the final verdict is…
Final Verdict: Meh
Posted by Novelty at 06:40