It's the weekend!  Welcome to the penultimate day of Bionic week of MotU May here on Toy a Day.  It's been a crazy week looking at some of the most disappointing figures ever, and today I open Rio Blast! 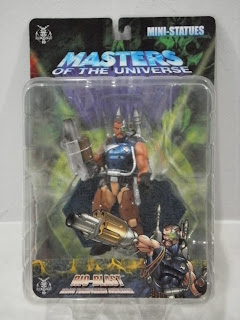 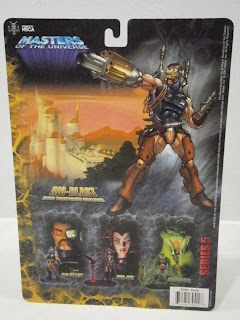 Rio Blast is a staction from the penultimate series of the NECA figures, Series 5, together with Evil-Lyn and Sssqueeze.  Rio Blast's pose in the bubble is interesting, but it seems so tiny inside that bubble - there's just way too much empty space there.  The green background on the front of the card also does not compliment Rio Blast.  The back of the car is a lot better - a nice action pose of Rio Blast next to the beautifully rendered millennium royal palace, with the 3 figures of the wave beneath it. 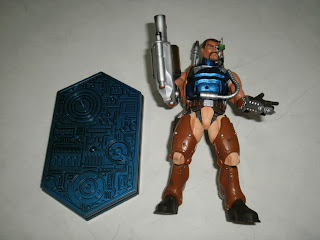 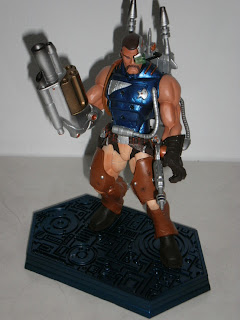 I didn't expect any weapons with Rio Blast, and I wasn't disappointed.  He comes with just the heroic blue figure base, on which he poses rather heroically, but well, he does nothing much.  I'm not sure I like the huge gun in his hand - that doesn't seem to within character for him - after all, his guns are supposed to be hidden.  What I do like about him are the metallic colours, from the silvers to blue on his vest. 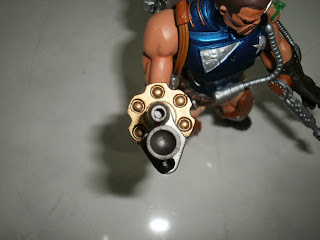 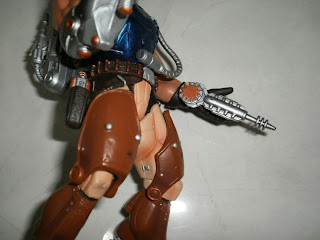 His face is nicely sculpted complete with handlebar moustache and all.  That seems rather a bit of a cliche though, I mean if they were going to update the 'tache, they could have gone with a goatee instead, which is the rage these days.  I'm not so sure about the monocle-like "eyewear".  I don't think Rio Blast needs that.

The two guns from in his hands are well nice and shiny (but if I was writing on Hobotastic, I'd have said something else).  Although I think the big gun is out of character for Rio Blast, it is done rather nicely with quite a bit of detail.  The other gun, the one in his left hand, is attached to his glove on the wrist and that seems a lot more in character for him. 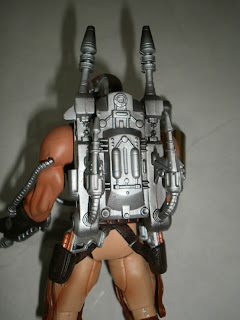 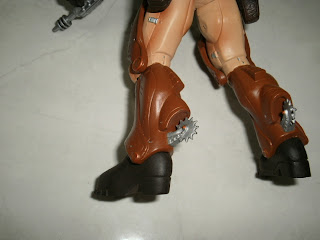 The backpack has been nicely done as well - there's a lot of detail on the back.  However, the guns on it are a bit bent (insert Hobotastic Har Har! here) from being in the bubble.  Another disappointment is that it cannot go over Rio's head.

I do like the lap protectors (for the lack of a better word - and I'm trying hard - ha! - not to make a lap dance joke) on his thighs, and the spurs on his erm... not boot.  The spurs are attached to hsi shin protectors, which is an odd place to attach the spurs.  Odd and impractical. 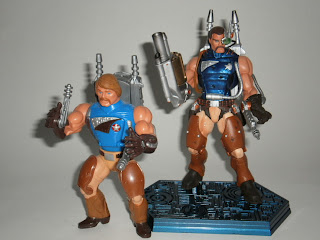 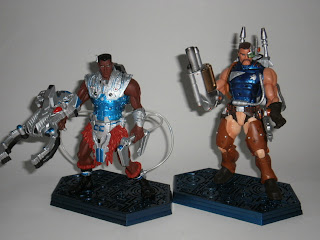 Rio Blast seems to be a faithful reproduction of his vintage counterpart, albeit with a haircut.  Now Rio doesn't so much look like Buck Rogers, but instead looks like Jack Shephard from Lost (although, I'm sure Ed Humphries will probably disagree with me there).  Gone are the bow legs, in are what appears to be chaps.  Actually, with the exception of the main gun in his hand and the lack of articulation, this Rio Blast isn't too bad and would have been awesome as a proper action figure.

But the main question is, does  Rio Blast seem anorexic to me?  Well, he is muscular, no question about that, but he is also slim, unlike the other characters who look a lot more buff.  Therefore, he does look proportionate for some weird reason and is not too anorexic looking.  I've yet to make up my mind whether he's going on the shelf or back in the box though.
Posted by Novelty at 09:33