Number 11 in this Dick Tracy fortnight is a "Big Boy".  Well, I wonder what that refers to, but since the line has been highly suggestive of peckers anyways, I won't be surprise if it referred to his Johnson.  Welcome to the rather weird and disturbing Dick Tracy line here as part of Super Screened September! 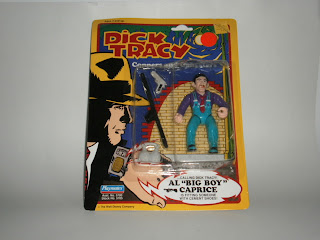 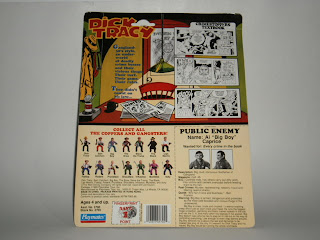 Al comes on the standard Dick Tracy card, which has all the three primary colours and black.  That's sure to jump out on the shelves.  A quick tip for those who do not know, the only place where one can identify whether a character is a cop or a crook is on their bios.  Crooks state "Public Enemy" while Cops have "Police Profiles in Courage" at the top of the bios. 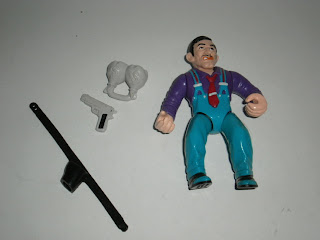 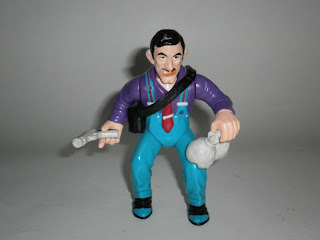 The sculpt has the usual details - tie, tie-clip, sneering mouth, there's even suspenders on this guy.  The paint is moderately okay, but it's not spectacular.  The face is painted with a lot more care than the body.  The colours though, again aren't as garish as some of the other figures in the line, although the clash of the cyan with the purple and the red makes the figure looks as if he dressed in the dark.

Al comes with the usual accessories - his "piece", the gunbelt with the penis shaped peg and a pair of money bags that looks more like a pair of testicles.  This would have been bizzare, but the line has stopped surprising me with the wacky accessories a long time ago. 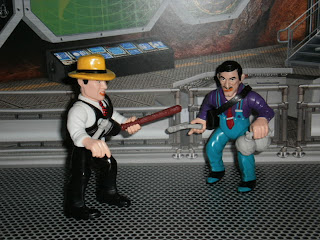 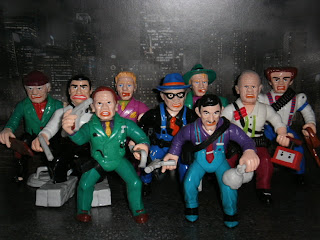 Big Boy has a rather long and thin head and thanks to that, he doesn't look like a bobblehead.  In fact, when he's placed next to the other figures in the line, he looks a bit underfed.  And is he a "Big Boy"?  Well, the sculpt seems to show that he's wearing diapers underneath his pants, so no, I doubt he's a "Big Boy" in more than one sense of the word.
Posted by Novelty at 00:54