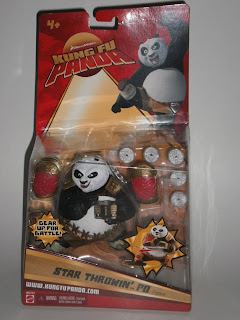 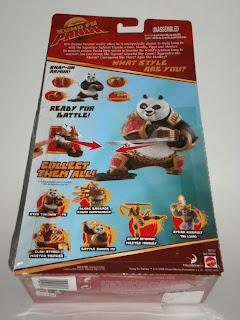 Po comes on the usual Kung Fu Panda card.  Well, I can only assume that it's the usual since there was only one wave that I know of.  The toys didn't do too well, and Mattel did not promote the line too agressively, so these just peg warmed where they were available.  The design is boring - Hasbro would have used the folded title cards and a unique bubble to give a 3D looking front.  Here, it's just a boring title card and bubble.  The good thing about the front is that all the accessories are visible.  The back of the card has nothing unusual - action feature, included accessories nad other figures of the line. 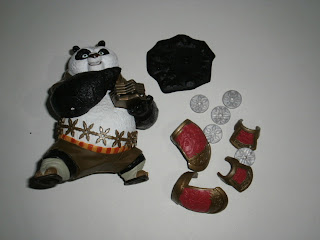 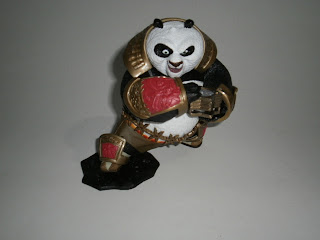 Po comes with 4 pieces of limb armour, 5 throwing stars, a stand and uh... nothing else.  The armour fit where they are supposed to fit, although one can't tell which pieces goes where just by inspection, it has to be done by trial and error.  The stand and the throwing stars are nothing to write about - sure, there are some details on them, but they aren't spectacular.  The figure comes with... zero points of articulation.  Yes, this is basically a statue!  Well, almost zero.  The right arm actually has a point of articulation on the elbow, but that is tied into the action feature and can't be used to pose at all.  Perhaps that is why the line didn't do too well.  There's an action feature - the throwing stars actually fires from the thing Po clutches to his chest when a lever on his back is pressed. 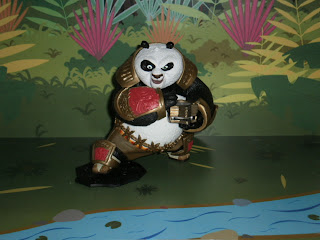 The fig looks great, but feels like an oversized Happy Meal toy.  It's definitely not worth the price that I paid for him retail  I've got a lot more nasty words for him, but uh, I'll self-censor myself...
Posted by Novelty at 00:37