Well, it was Po yesterday for Super Screened September, so I thought I'd do the other half of the 2 figures I picked up way back when for Kung Fu Panda.  Yup, I'm talking about Tai Lung. 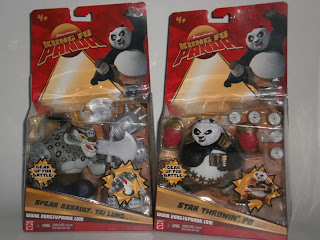 Tai Lung was the villian in the story, well, a villian in so much as a villian can be in an animated movie targetted at kids.  He's supposedly the best at the martial arts, but was too proud or something and desired power and stuff for himself.  Or something like that. 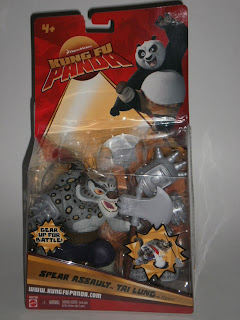 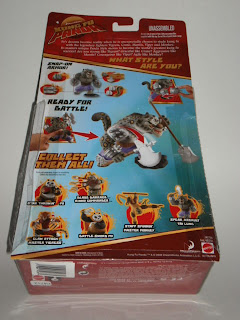 The front of the card packaging is awkward.  It has Po's picture on the top, which is really misadvertising, since this toy does not contain any part of Po.  But it's the toy packaging for the millennium stuff, and all the front of the cards are the same to save cost.  The content in the bubble is crowded, and there are some bits that is hidden behind the title card.  The back of the card is similar to Po's from yesterday, but it's of course, specific to Tai Lung. 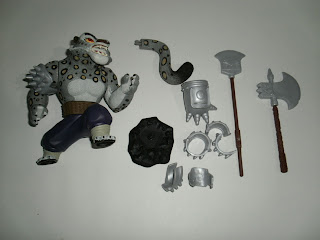 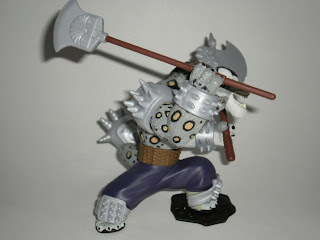 Tai Lung comes with more articulation than Po, including a point on his tail.  Part of his arm articulation is limited by his action feature, but it still functions in a restricted way.  The legs though, are not articulated and Tai Lung is a statue from the waist down.  The paintwork is rather nicely done, and it brings out the design of the character rather well.

Tai Lung comes with two bracelets, 2 shin guards, a glove an axe and a uh, weird chinese halbard., in addition to a stand  The stand is rather useless since the lower body of Tai Lung is a statue.  Despite the plainess of the accessories, they do add a lot to the figure. 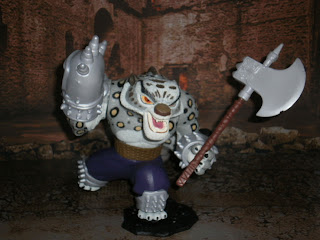 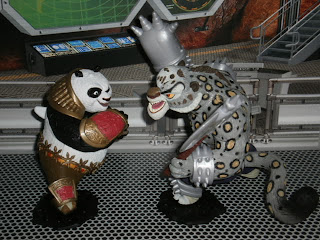 I'm still not much sold on the statuesque qualities of the figure, but I have to say, he looks amazing posed on the shelf.  Still, that's no reason to keep him there though.  Back into the box he goes!
Posted by Novelty at 00:39