This is the sixth of the Dick Tracy figures I'm opening, which means I'm halfway through them.  Welcome to Toy A Day and if you're just joining me today, well, I'm opening a toy for each day of 2010, usually with themed months and sometimes in themed weeks.  This month it's Super Screened September where I open toys with links to both animation and movies.  And this fortnight, I'm opening Dick Tracy toys and today is the turn of Mumbles. 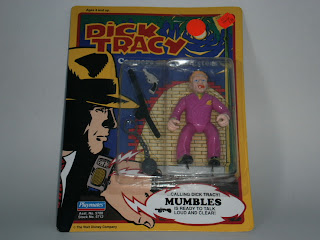 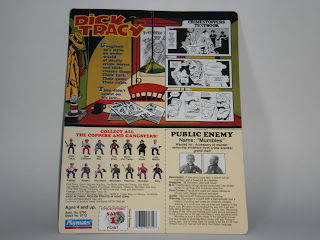 Mumbles comes on the standard Dick Tracy card, and I've already talked about this a great deal in the preceding five previews, so I'll just direct you there for my thoughts about the card. 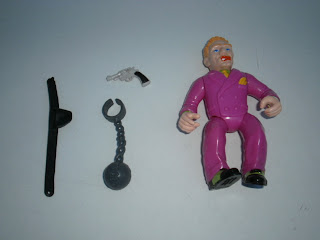 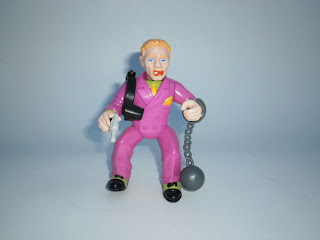 Mumbles comes with a really horrendous pink suit that clashes with his green and black shoes.  Really, he should be shot by the fashion police or something.  The sculpt, though is nice, there's a handkerchief in his breast pocket and a tie sculpted on.  The face sculpt has a sneer tha reminds me of Pixel Dan.  The paintwork isn't as exact as it should have been, but it does highlight the sculpted details on the face and torso 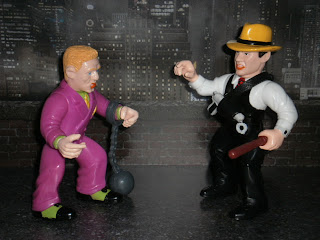 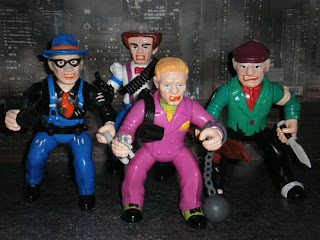 Mumbles comes with the usual phallic weapons to go along with the Dick theme.  There's a pistol, a gunbelt  that has the penis shaped peg (which Mumbles can't really wear properly), and a huge ball and chain.  Thanks to the colour of his suit, he does stand out in a crowd of the other toys, and perhaps because of the garish colours, he looks less like a bobble head doll than one of those troll with real hair things.  Ah well, I'm glad he's going back into the box after this fortnight is done.
Posted by Novelty at 00:50