I transition from a recent line to one that was produced in the nineties.  It's still Iron Man week and I open Tony Stark from the toybiz line today. 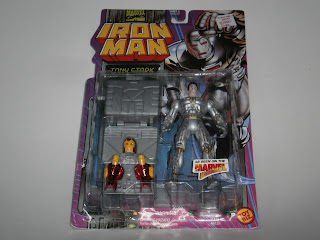 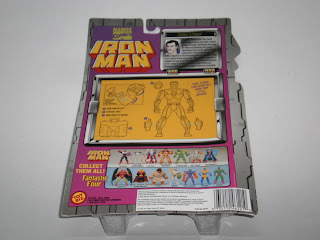 The toybiz packaging is larger, but that's probably because the figure was larger too.  There's the Iron Man logo front and back, and a picture of the titular character on the top.  The name of the character is printed onto the card, removing the need for a title card, which meanas that the bubble can be kept clear to display the contents nicely. 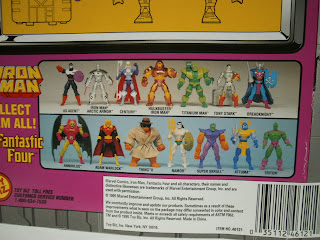 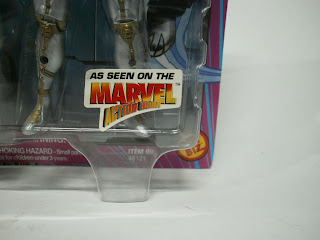 The back of the cards has the instructions, and a nice look at the figures in the line. 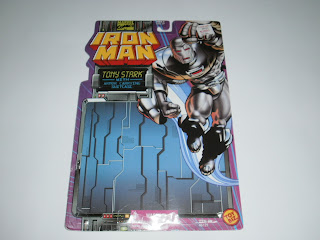 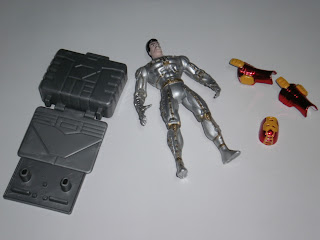 The front of the card has a rather nice computer chip look behind the bubble.  Also, it's nice to see that the Iron Man picture extends down to show him almost full-bodied on the card.  The character comes with an oversized suitcase which has two hinges, and three armour pieces.  The leg armour can be pegged into the holes on the internal of the suitcase.  The head though, can't really be plugged anywhere that I could see within the suitcase. 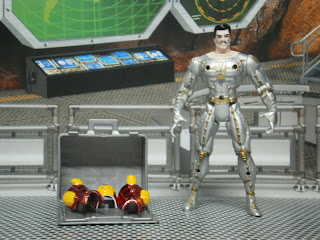 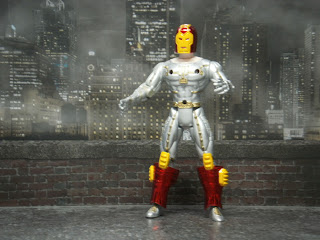 The figure has the standard nine points of articulation - knees, hips, elbows, shoulders and head.  It's sculpted with quite a bit of detail and is painted in a rather boring silver with some gold highlights.  The face sculpt is relatively good and the painting on the face is crisp but it's also a bit thick.  The leg armour pieces pegs into the holes on his lower calves.  The face plate just fits over his face and is held on by friction.  There are holes on his chest and back, but there's nothing to affix there.  One wonders if he's suppose to have more armour pieces. 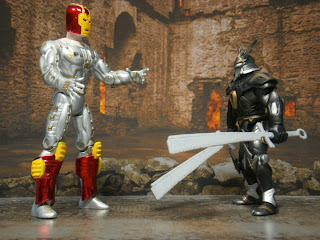 So this isn't really Iron Man, but so far this week, it comes closest to being him.  I'm not sure I like this figure though.  Sure, the armour pieces are nice for play, but I do wish he had more pieces... and a better look.
Posted by Novelty at 22:25