I'm still working through the box of Lego stuff and this one is one from a couple of years ago.  Mars Mission was Lego's attempt to relaunch the Space theme in th recent years, and it must have been successful because it lead to the Space Police theme.  Well, next year there's no Space theme other than the Space Shuttle City theme, so... 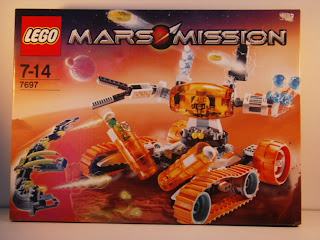 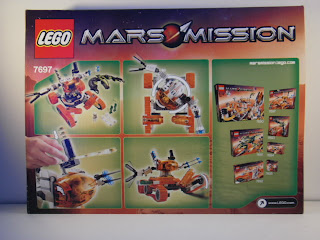 The box is nice and orangey and Mars like.  The photo on the front of the box looks less like a photo and more like a drawing.  The back of the box sows the action features of the set as well as the other sets of the line, a trick that Lego is borrowing from the non-Construction toy packaging.  I miss the days when alternate models were shown on the back of the box. 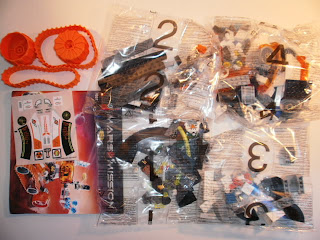 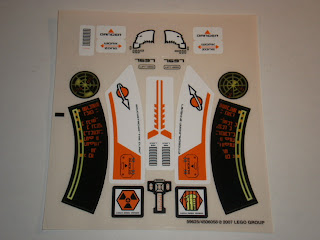 Out of the box, there are four baggies together with the instruction booklet, the loose tires and threads and the decal sheet.  The decal sheet is attractive, and since this is a relaunch of Space, there's even the Classic Space logo in orange and white! 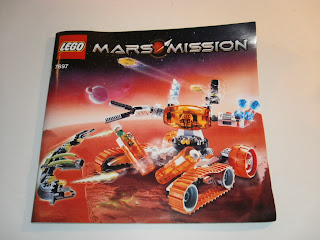 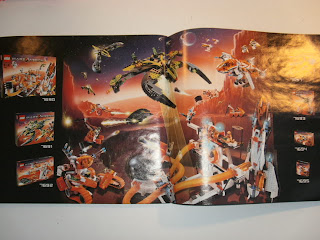 The instruction book is thick to boot.  Besides the usual - step by step assembly instructions , advertsand parts count, there is this interesting double-page poster-esque display of all the sets, with the boxes alongside.  That's not used too often on the instruction books, me thinks! 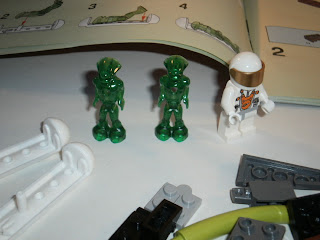 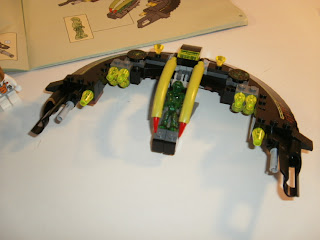 There are two aliens and a spaceman in the set.  I like how the aliens look like they are made from Jello.  The spaceman has a nice gold visor.  It's not vacmetal gold, but somehow it's still shiny.  The build for the Martian vehicle is interesting.  It's all contained in Baggie 1.  Thanks to its symmetry, the build was easy and fast.  There's a lot of weaponery on the jet and the interesting use of SNOT (stud not on top) gives it a sleek shape overall. 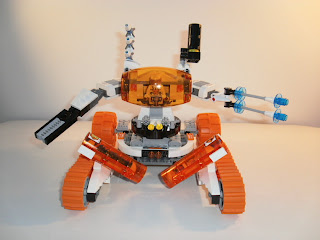 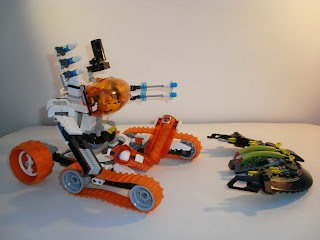 The remaining three baggies builds the tank/rover thing.  Despite it's relatively simple look, it took a while to build everything up.  There were some hairy parts in the instructions, especially where new bricks were placed underneath or behind existing ones - there were times that I had to go back a few pages in the instructions to make sure I got everything built.

This vehicle is armed to the teeth as well; there are lasers, firing missiles (powered by friction and plastic elasticity) and a spring powered disc launcher.  The tank threads and the wheel seems an odd combination.  It would have been better if it was all threads, or all wheels.  Then there are two "containment pods", which can be used to store a stretcher.  The stretcher can hold gems or one of the Jello Martians.  The canopy construction could also be better as the few times I had to flip it up, it basically flew off.

Overall, I like the Martian black jet vehicle.  The Spaceman's vehicle looks interesting and has lots and lots of action features, but looks a mess, particularly where the wheels are concerned.  A good attempt and a good set for any Lego Spacehead out there (and the pandering to Classic Space fans with the logo didn't hurt either).
Posted by Novelty at 00:52