Welcome to Snakemen week. For those just joining the party, I'm opening a toy a day in themed months (more or less) and this month happens to be Anniversary April. We'd be moving on to Masters of the Universe May though and this is the transition week. I'm breaking down this two months period into themed weeks as well, and last week was Attack of the "killin teh lien" Clones week. This week, it's Snakemen week.

We kick off this week with Sssqueeze. Sssqueeze never did make it to the main Millennium line as an action figure, instead he (it?) received the NECA staction treatment and was produced as a statue instead of an action figure. 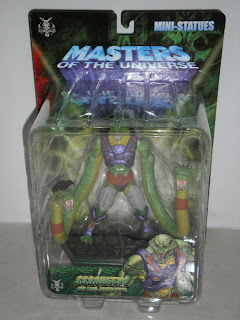 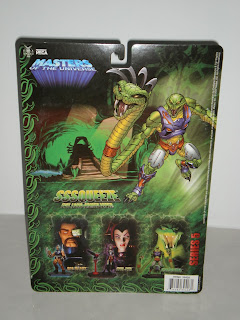 Sssqueeze is in the penultimate series, that's Series 5, with Evil-Lyn and Rio Blast. There is a snake border around the cardback and the title card/sticker which is nice. The cardback features what appears to be the throne in Snake Mountain, which I guess is a good representation of the Snakemen. The illustrated image of Sssqueeze focuses on the snake head on Sssqueeze's arm instead of the actual figure itself, which works to highlight Sssqueeze's main feature. 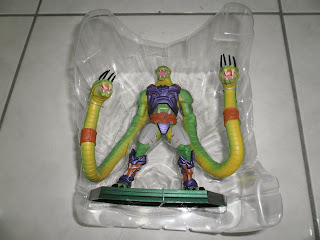 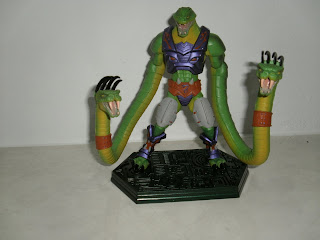 Sssqueeze is a big figure and comes with... well just the base. There are no weapons or other accessories with the figure, which is slightly disappointing. However, the actual figure itself is nicely sculpted with lots of features. The fixed pose (being a statue and all) could be better, but what it comes with isn't too shabby. 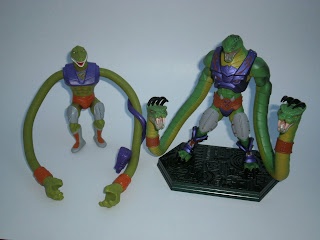 Surprisingly, the figure seems very true to the vintage figure - with only the snake heads instead of hands on the arms the only main change. The update has a lot more sculpted features and is accentuated with bits and bobs here and there - check out the boots, for example. One thing that's missing is the snake-with-gun-in-its-mouth that's present on the vintage figure and not the staction, but that's a minor quibble.

Overall, I do like this figure, despite the fact that I thought the Snakemen was overkill in the cartoon and was coming into this with a strong hate for the Snakemen (sorry Toni Heikki pH6). Let's see what the rest of the week will bring.
Posted by Novelty at 17:15