Welcome to the Evil Horde week of Anniversary April. MotUC Hordak goes on sale (again!) on Thursday, so I thought I'll go ahead and show one of his predecessors - NECA Hordak! 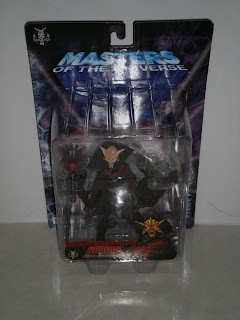 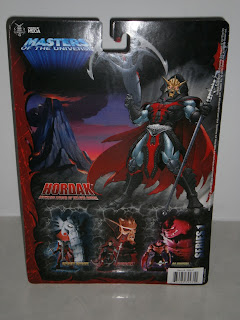 Hodak, kicked off series 1, together with Snout Spout and Clawful. The cardback art is awesome, and Hordak is shown with such majesty. It's surprising that they went with a volcano for the Horde instead of Fright Zone, but I guess at some level that works. 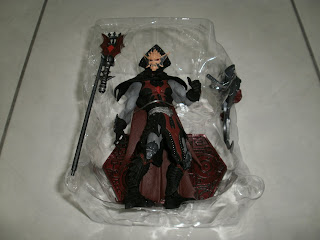 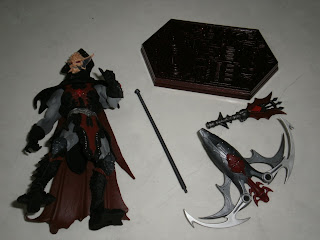 Hordak comes with his staff (which is in two parts so that it could fit in his hand), his reimagined crossbow and a stand. The designs on the accessories are excellent. The giant mechanical bat crossbow looks powerful and cruel at the same time. The staff is also nicely done with the bat motif and the detailing - even the shaft is not spared, and is exquisitely detailed. 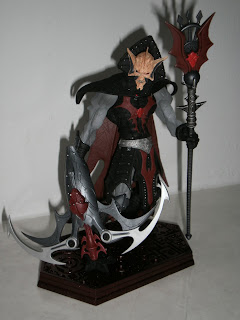 And the figure? He's nice, but seems to me that he lacks a bit of something... perhaps it's muscle mass? This Hordak looks very anorexic to me. Still, he comes with the usual Hordak colours - red, black and grey/silver, so that's all good there. 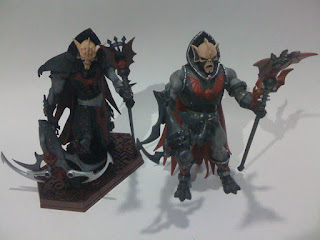 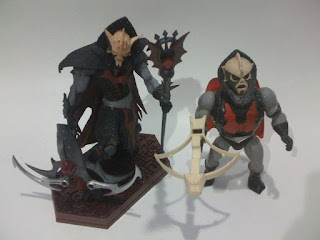 Although the NECA staction stands heads and shoulders above the vintage figures literally, they don't do so figuratively. When compared with Buzz-Saw Hordak above (my only Hordak with a cape), the staction looks just like a typical henchman, and not the leader of the evil horde. Although it has a lot more detail and an extra accessory, the vintage figures still look better than this underfed staction thanks to the clean lines and uncomplicated design. Plus, there's articulation on the vintage figures, something which the staction lacks. 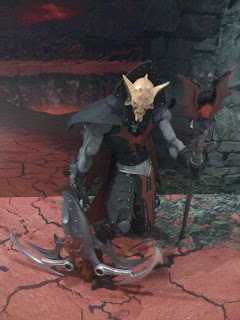 It's not looking good for this staction, but you know what, it's still early in the Horde week. Perhaps things will change by the end of the week.
Posted by Novelty at 00:24