I thought I'd take a break from the figures today and just open something a little different. It's a good thing I've got such a huge stash to choose from. Anyways, I chose the Battle Station because it seems intriguing and is not a vehicle. 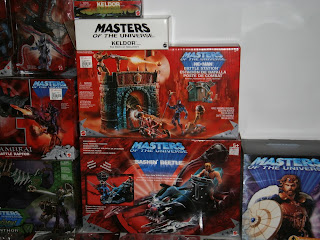 I don't think this toy showed up in the cartoon. Nevertheless, like all vehicles in the line, this was a new creation that has no ties to the vintage line. 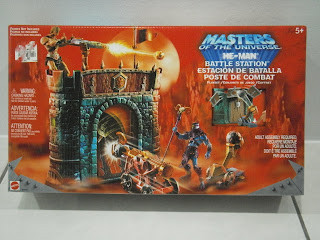 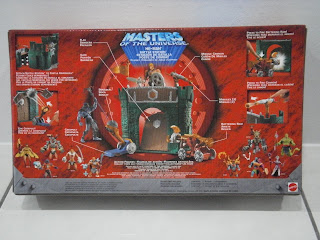 The box is intriguing - a wall in the middle of nowhere being attacked by two vehicles. It doesn't make sense, but it does show rather well what's inside the box. The back of the box has the standard red card background, with a photograph of the actual toy in the centre and its action features in inset boxes around it. Other figures in the line are also shown at the bottom - standard for the usual red card. 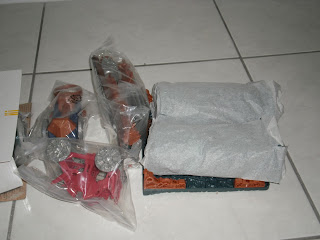 I have to say the packing is excellent. I wasn't expecting that many parts to drop out of the box, but there are a lot of pieces, and most of the toy is to be assembled together, almost Lego like (or more accurately, like Playmobil). The smaller parts are in baggies and the larger pieces are protected with tissue. There are also parts in baggies protected by tissues. How's that for being excessive! Not shown in the picture is another cardboard box inside the actual box. That's double protection there. 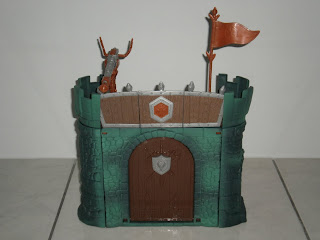 The castle bit is rather disappointing. It's short - only a story tall. I'm sure Samurai Skeletor, with his stilts could easy walk over the castle (OK, that's not possible, I was exaggerating). The door is plain, the brick walls lacked the complicated details found on Grayskull's walls. I didn't like the fall apart panels sitting atop the doors - that's just flimsy. The missle launcher, though is nice and the fact that three missiles are provided is a good bonus. 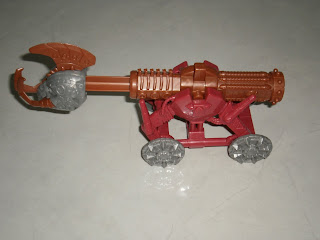 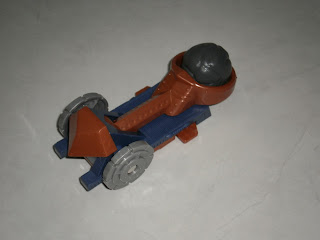 There are two siege vehicles - a battering ram and a catapult. I like the details on the battering ram - the skull ram with the mohawk is funny, but effective. Add to the fact taht the ram is actually spring loaded and it's full of win! The catapult reminds me of the Visionaries catapult vehicle, and it's also spring loaded, which makes it fun. It does not have as much detail as the battering ram, but the sleek lines aren't a distraction. I think these two are the best part out of this box. 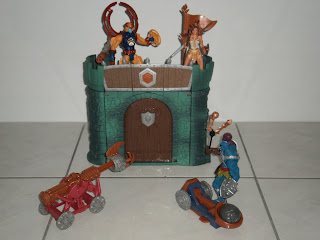 Overall, there seems to be "kiddie fun" stamped all over this, i.e. I feel that it's a bit juvenile. It seems to be a cheap way for kids to get a door and some castle grayskull wall without getting Castle Grayskull itself. Having said that, there's a hinge provided to connect this Battle Station to Castle Grayskull, but I'm not sure how much use that will get. It's also possible to remove the wall and door and make a tower out of the end parts of this. I have the sneaking suspicion that the tower could be stacked atop Castle Grayskull somehow, although I haven't yet tried it.

The two spring loaded siege weapons are great though, and I would say that it's definately makes this worthwile for fans to pick up.
Posted by Novelty at 23:49