It's Toy Story week, so I thought I'd do a repost of the first ever review I did for Lemonjuice McGee's Hobotastic Toy Review (RIP).  This is also my most popular post there based on pageviews.

*This entry comes courtesy of Duke Novelty Nostalgia of Toy A Day fame.  Read on and be amazed! – Lemonjuice McGee
Mention Toy Story and most will remember Buzz Lightyear or Woody or even the grumpy old prospector.  But will anyone be able to name the dinosaur who’s best friend with the piggy bank?  Probably not.  Here’s a quick review for Rex, the comic relief dinosaur from the Toy Story movies. 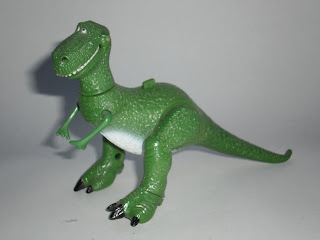 I have no idea who voiced him in the movies, but I do know that this toy is from the first series of Toy Story stuff, and unlike the Toy Story toys of today, the line actually belonged to Kenner way back then.  There’s 6 points of articulation – the “shoulders”, the hips, the neck and the jaw, but the hip joints are stuck to its action feature.  See that button on it’s back?  When it’s depressed, Rex’s leg will move as if he’s running.  Uh, OK.  Is it fun? Definately in the Aaaaagh! category.  Wait, wrong blog… 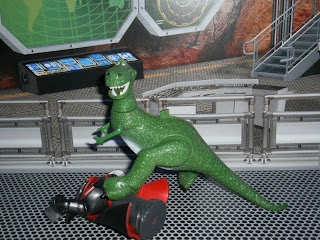 Besides being the comic relief, his one claim to fame, at least in the first two movies (I’ve not watched the third, although I know it’s available on pirated DVDs in Yuckistan), was his accidental defeat of Emperor Zurg.  OK, so I don’t exactly have a Zurg from the first series handy… 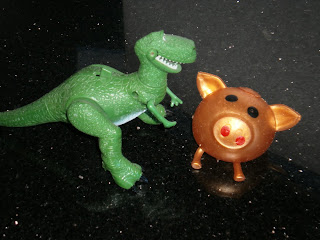 Rex’s best friend in the movies is a piggy bank named Hammy.  OK, Hammy is usually Rex’s partner in crime with the comic relief, but there’s only so much you could do with a pig.  BTW, I don’t have a Hammy either, so I had to make do with a Made in China (and I actually purchased it while I was in China) pig. 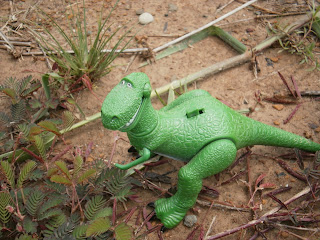 But we’re not here to talk about the movie, we are here to talk about this toy. Let’s see, what else can I say about it? It’s green, it’s action feature sucks (wait, I’ve already said that), it’s jaw moves. Oh, and it glows in the dark. Say what? No really! The whole dinosaur? Erm… no, just the white patch on his stomach. Oh. But it glows better and brighter than Zodak. Way hey! Or not. 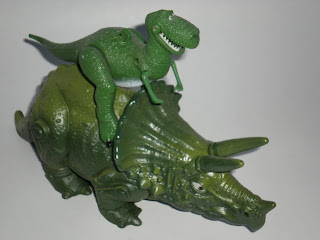 Lemonjuice told me not to use the f word too much.  Well, I’m not going to.  But a picture says a thousand words, so I’ll just have to let the picture above do it’s thang!  And if the Triceratops looks familiar, yeah, that’s actually the vintage MotU Bionatops that I recently opened. 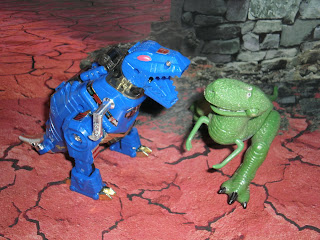 All right, comparison time (yes, I know this isn’t Toy a Day, but I like doing comparisons).  I don’t have a Toy Story 2 Rex (who looks slightly different from this Rex), so we’ll just have to make do with… Generation 2 Grimlock?  Huh?  Well, one is blue, the other is green.  One transforms into a robot, the other has a button that makes its leg run.  One has shiny metal parts, the other has a gitd belly.  You figure out why I picked these two.  But then again, if you have had enough Southern Comfort, things will begin to make sense. 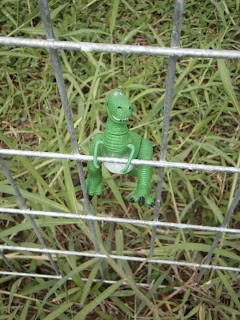 I was also gonna do a comparision with something from Jurassic Park… but I don’t have anything from that line.  So you’ll just have to make do with this picture of him behind a fence.  Yeah, we know how successful the fence was in Jurassic Park.
So that’s it from me.  And if you think that was 2 minutes of your life that you aren’t going to get back, well, you’re right.  Apparently, I’m a mean drunk.  You can read about my (more sober) writings on my blog, where I open a toy for each day of 2010 and write a quick review for them.  Duke Novelty out!
Posted by Novelty at 11:37