#536 of Year 2 Sectaurs Skulk and Trancula

The Sectaurs have always freaked me out.  I never watched the cartoons as a kid, or even got the toys.  But there's a whole bunch of people who have fond memories of the toyline, so I thought that as an adult, I should at least give it a try. 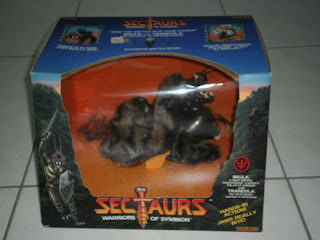 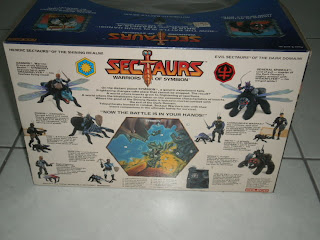 I have no idea who Skulk is, or whether Trancula is the name of the beast that's he's rinding on, or it's the other way around.  The box though is huge, and can easily fit at least four of the toys... with room to spare.  The whole box is painted on four sides with amazing artwork.  The back of the box has a map, and shows all the toys in the line... I think. 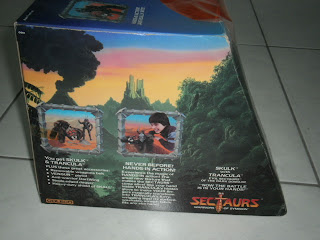 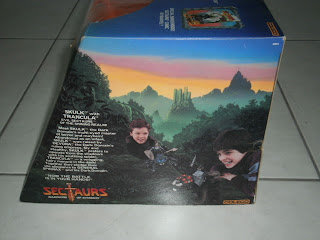 Interspersed on teh artwork on the left and right flaps are pictures of real children playing with the toys which seems a bit weird.  The background though reminds me of the art used in the MYP cartoon series, but since this precedes MYP by three decades, one has to wonder... 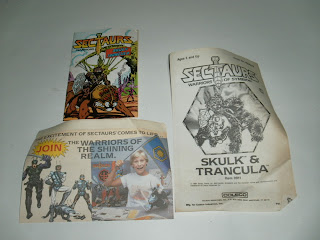 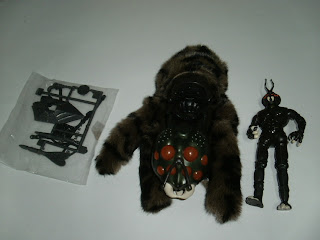 To my surprise, there's a minicomic in the box.  And it's a Marvel drawn and produced comic.  Yay.  There's also an instruction sheet and one of those envelopes to join the Sectaurs club thing.  The toys in the box include the figure and the vehicle and a baggie of accessories.  The baggie contains a harness, a shield, a pistol and an arrow thing with two dragonfly wings.  The harness took, a while to fit onto the body, but it's made from a very rubbery plastic (or maybe it's rubber) so it was stretchable. 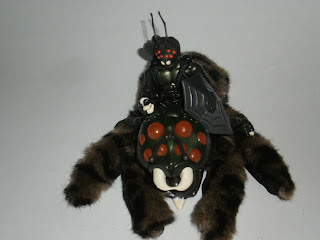 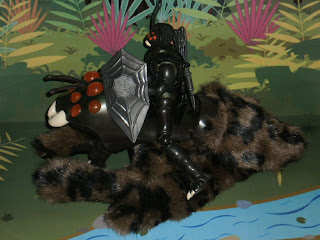 The figure has seven points of articulation - ball joints on the shoulders and hips and knees and neck.  I was pleasantly surprised at the range of movement on the figure and how well it sits in the saddle.  The sculpt on the figure is amazing, with all sorts of bumps and scales and insectoid features.  The paint even has a metallic sheen reminiscent of that found on real live beetles and the such.

The beast is actually a glove that's covered with fake fur on the thumb, index, ring and pinky fingers.  The middle finger is part of the jaw of the creature and can be used to raise and lower the jaw (mandible?) from the upper jaw (maxilla?) which is attached to the head.  The head is grotesque, but the paintwork is excellent and does give it that very gross looking feel.

Overall, the creature is fun, but looks creepy, which is what is expected of it.  I can't believe how much fun I had with the figure... once I got over the looks of the toy and my disgust with the grotesqueness of it all.
Posted by Novelty at 00:40