The UK produces some of the least well know toylines for the English speaking world.  Thanks to Havoc, I've got my hands on these Character Options minifigures featuring characters from the Doctor Who TV series. 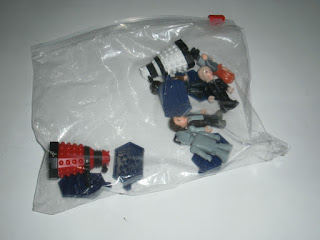 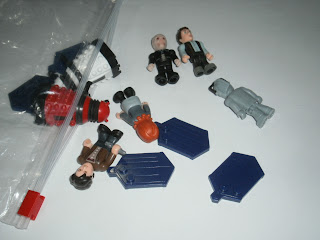 At first glance they seem to be Lego compatible - witness the studs on the base and the shape of the characters hand.  However, these minifigures aren't anything like traditional Lego minifigures - for one they are not orange, and two, they seem more proportioned to human dimensions than the Lego minifigs. 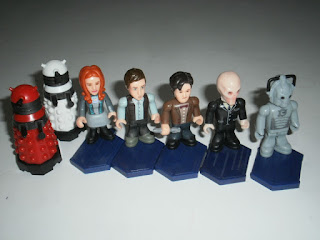 I have no idea who some of the figures are, but the white and red Dalek seems a bit Danish to me - Lego Spacemen originally were white and red because those are the colours of the Danish flag.  I presume there's a super rare blue version of the Dalek somewhere.

Amy and Rory is the redhead chick and her nerdy looking Brumbie boyfriend/husband/whatever.  I don't watch the series, so I have absolutely no idea what is their current relationships.  Then there's Dr. Who with the brown jacket.  The figures have really nice decor on their torsos down to the buttons being displayed.  Amy's hair is nicely sculpted and the doc himself even does bear a resemblence to his actual actor.

I'm really tempted though to sneak some of these characters into my Lego Friends display to see if anyone would notice.  After all, I'm still hoping for a Joey and a Ross and the Doc and Rory would fit the bill there....
Posted by Novelty at 14:31

Email ThisBlogThis!Share to TwitterShare to FacebookShare to Pinterest
Labels: Doctor Who