Thunder Punch He-Man is the first Quarterly figure of 2012.  That's nothing special in and of itself, except that in the 30th anniversary year of He-Man, the first three Quarterly figures will include a minicomic drawn by Dark Horse.  Now that's something that's not been seen for over 20 years. 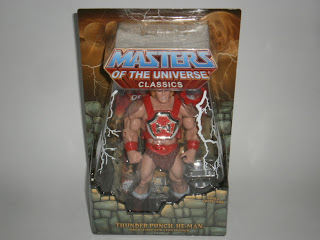 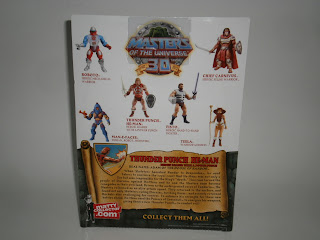 Thunder Punch He-Man or TP He-Man (no toilet humour please, this isn't a Robot Chicken figure) comes on the standard MotUC card.  I find it interesting that they had to shrink the font of his name on the title 'card' such that it's almost unreadable. 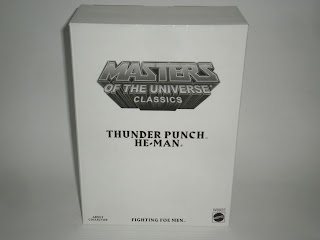 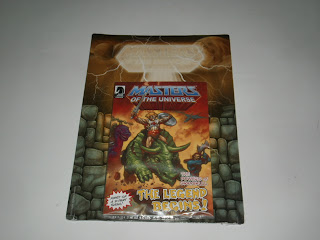 The comic is enveloped in a plastic bag and taped to the front of the card, behind the figure. 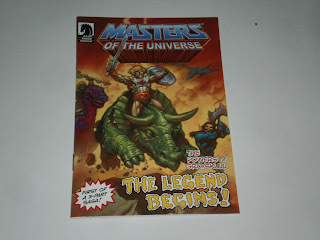 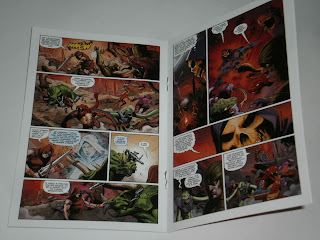 To be honest, I was in a little bit of shock after getting the comic out of the plastic bag.  The art looks great and the colours are vibrant and pops off the page.  This isn't your father's minicomic! 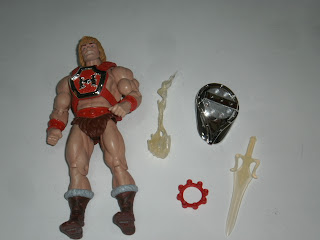 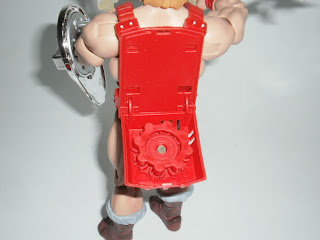 He-Man himself comes with his power sword, a shield, some fake caps and an energy blast thing.  It's a bit funny that Mattel chose to use this almost transparent/clear pale yellow plastic for the sword and the energy blast.  They could have gone with gitd and it would have been a more popular choice.  I like the vac metal on the shield (and I hope it'll last), but I like the little detail that the fake caps can be placed either on the shield, or inside his backpack.  Oh and the dial on his backpack actually does rotate.  OK, so the caps doesn't give off explosive sounds or produce that burnt gunpowder smell anymore, but it's still a nice nod to the vintage figure. 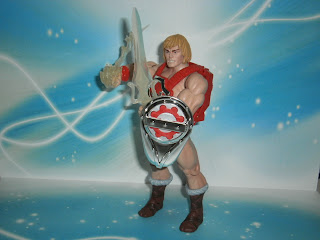 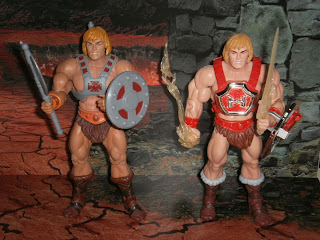 The figure himself is a basic He-Man repaint, and I do mean repaint.  And I do mean repaint.  His belt and bracers are now red, and the boot tops are white (fur).  He's also been painted in a skintone that's so pale to the point where he almost looks like a cheap knock-off figure.  Almost.  Somehow though I like the "whitebread" look to this He-Man, and it differentiates him from the other He-Mans that's sitting on my shelves.

Truth be told, I like this He-Man better than the Draego-Man.  I guess I'm probably in the minority here, but hey, that's how I roll!
Posted by Novelty at 00:33