I'm dedicating this note to Rainbow Brite who added me as her friend today.


This isn't part of the Toy a Day (TaD) in 2010, where I open one toy for every day in 2010. Nopers, these have already been opened... well, mostly. However, since these are going back into storage soon, I am taking pictures of them so that I'll remember what I have in storage. Since February is Femme Fatale February for TaD, I thought I'd continue the theme and include these today. Which means tomorrow I get to open 2 toys as part of FFF. 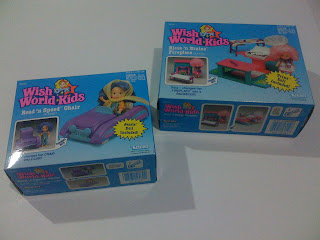 The Wishworld Kids were a line of dolls, and thus were aimed mainly at little girls. However, thanks to the popularity of Boy's toys at the time, these had a twist - the dolls had accessories that transformed into something else. The storyline behind the toy was that each character has a key which unlocked their furniture into something else, thus transforming their lives from the boring indoor existance to the adventure of whatever they would like to do. 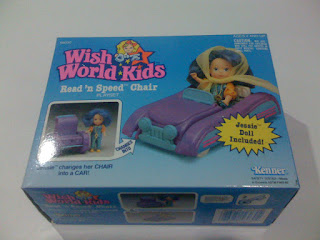 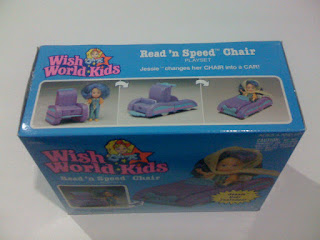 Read 'n Speed is the smallest of the toys and features an armchair that transforms into a speedy car. The story is that the doll "Jessie" likes to read and drive, hopefully she does not do both at the same time. Thus her key transforms her boring armchair to a speedy automobile. Okay... 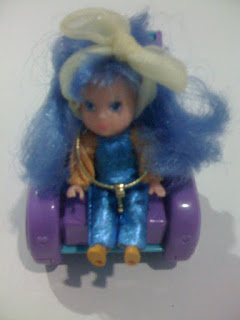 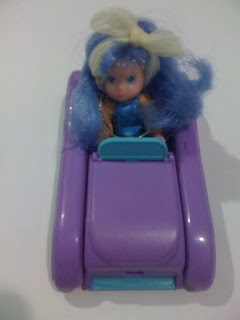 The transformation is simple but interesting, flip this, snap that and voila, armchair to car! The wheels on the car actually does roll, which is a plus point. The design of the car is sleek and curvey and easy on the eyes. The doll is no slouch either. She comes with only 5 points of articulation, like the rest of her comrades, but this is a girl's line, so I guess it must have some sort of combable hair! And in this case it's blue. I'm sure Mr. Bluehair must really like this doll. 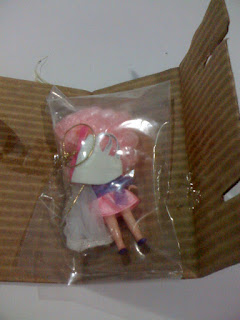 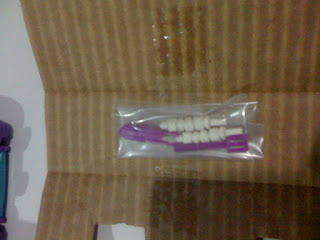 I did not realise that I have not fully opened the bits and bobs for the second set (what do you call a collection of dolls and accessories anyways?). The doll was still in her pristine plastic packaging, and the small accessories was in another bag. I'm thankful that this is an 80s toy, so it has no rubber bands or twisty ties to get me frustrated, only tape which is easily pealed. 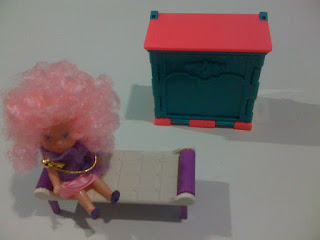 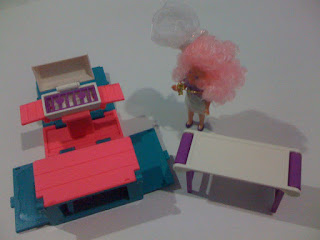 Blaze 'n Blaise seems a bit interesting as a concept. Trina (the doll) goes from enjoying the warmth of her fireplace from a lounge to cooking up a storm on her grill with just the turn of a key. Right. Feminist will probably rail against the sexism in the concept or something. I just think it's a weird concept, like jumping from the frying pan into the fire, or in this case the fireplace into the grill. 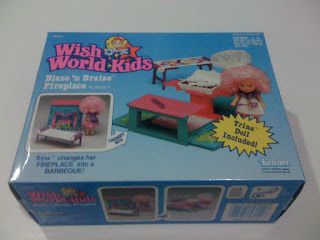 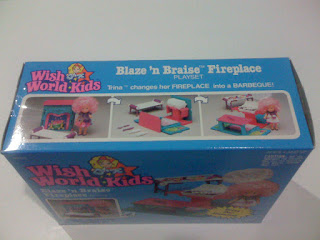 OK, I have to say that there's a decal sheet, but I decided that I'm not going to put on the stickers, so the toy actually looks very blegh. There's nothing complicated about the transformation for the fireplace to grill - the design effectively hides the grill inside the fireplace. A quick snap and the fireplace opens to reveal the grill. A nice touch though is that the top of the fireplace flips over to becomes a bench. Likewise the chaise to table is a rather simple transformation where the legs are flipped over. Easey Peasey. 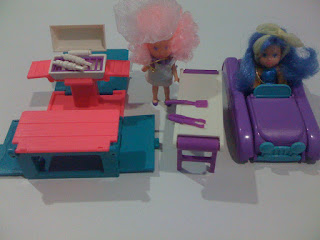 And that's both of them together. Each doll has a pink comb (not shown in the picture) and a golden key on a rubber band hung around their necks. I have no idea why Trina came with 2 keys though! This is the first series of the toys, there's apparently an unproduced 2nd series. There are also pictures on my really old website - check them out!
Posted by Novelty at 22:06