As usual, good things comes in twos, or at least that's what I say.  The entire Bionicle line has gone the way of the dodo, but I still have a whole bunch of them unopened.  I really don't like them, but there were just so many of them clogging up the shelves that it was hard to ignore them, so, if you can't beat the crowd... 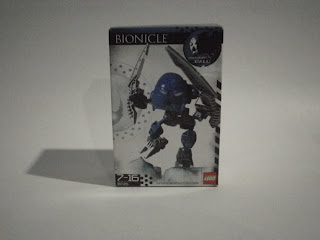 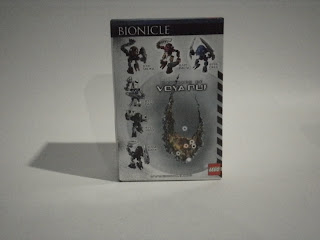 The box is similar to Kazi's from yesterday, with the obvious difference of the character on the front and the black bar over the top.  Despite the fact that everything looks the same, the colour scheme used for the figures do distinguish them from the others in the line so the boxes still retained their individuality.  It also helps that the background of the boxes are white. 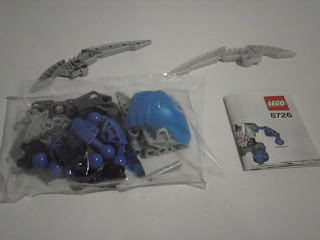 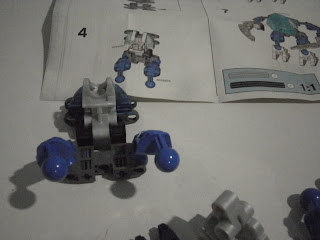 The box contains a baggie, an instruction sheet and two swords things in different shades of grey.  The build is pretty much the same as Kazi from yesterday and isn't too difficult.  One obvious difference is in the construction of the head (as in how it's put together), despite them both having masks. 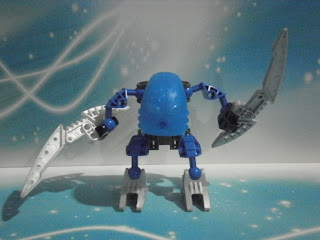 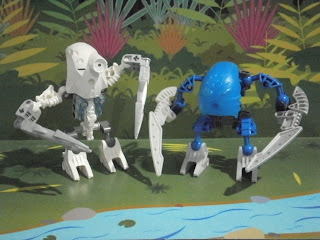 The figure is basically a blue figure holding swords.  It looks better as it does not have giant forks for hands, but consequently, the build is shorter because of the different elements used for the body and limbs.  it's a nice little figure with 9 points of articulation, but it's a boring Bionicle and it goes back into the box.
Posted by Novelty at 00:19