I was tempted to let today's review just survive on just the photographs, but oh well, let me try to put at least a line of text here and there so that people will not accuse you guys of "just looking at the pictures".  It's the trainrobos today, otherwise known as Raiden in Japan, but this is a fake imitation from China that seems rather good quality... perhaps they got the original moulds from the trash?  Who knows? 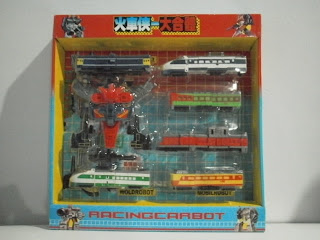 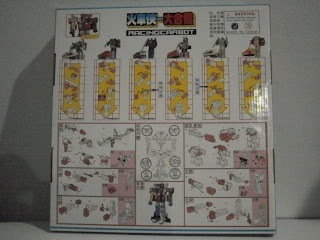 The box is interesting, and besides the chinese text on the top (does it actually say Train there?), the English translation is Racing Car Robot.  Still, everything is nicely presented in clear plastic for all and sundry to see.  The back has the instructions for the individual robot mode and for Raiden.  It's all simplistic... but it's also reminiscent of the Transformers instructions.  The back has some nice pictures of the robots and the ultimate gestalt. 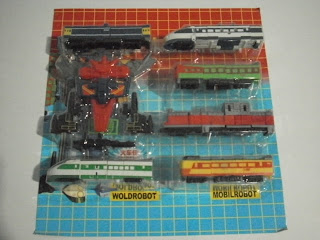 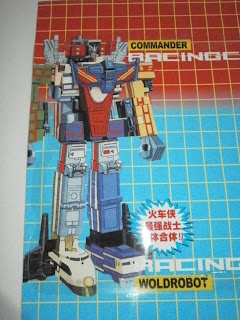 The box hides the card, and it is a card with a bubble.  The trains actually hide a nice picture of the combined gestalt mode, although I suspect that picture isn't of the actual toys, but the original Takara robot.  The card also gives names to four of the robos, including "Woldrobot", which makes me wonder what's a "wold". 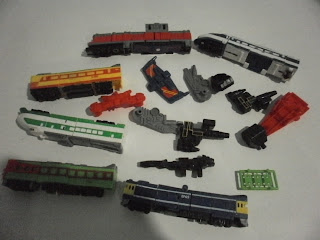 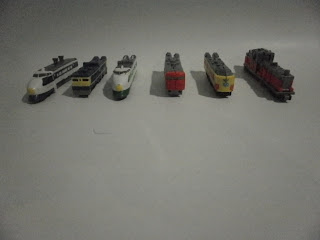 There is a while bunch of accessories that go along with the six trains.  Sadly, they did not reproduce the small guns for each of the individual robots.  I wonder why that is so.  They've also fashioned some connectors in green, when the original were grey... and these are smaller when compared to the original ones.  The inclusion of several pieces here also suggest that this was cloned from the Transformers release of the figure, as opposed to the Diaclone version, which have fewer accessories. 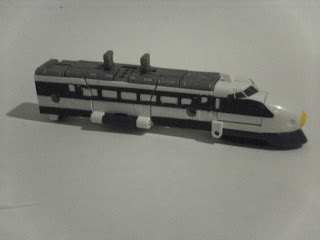 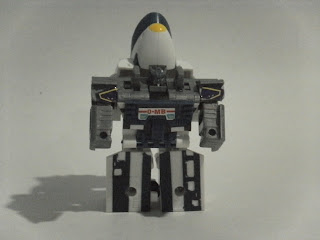 Shoki (or Commander according to the card) is a bullet train.  No surprise there.  The transformation mode is exactly the same as the vintage version - and everything fits together nicely, which makes me suspect that it's the same moulds as the original Takara version.  The blue is darker and the plastic looks cheaper.  The decals on the chest and shoulders are also applied slightly skewered, something that would not have happened if this was a Japanese release. 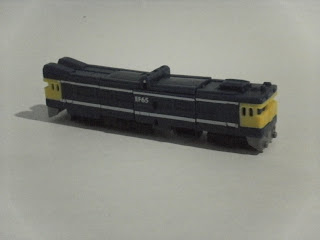 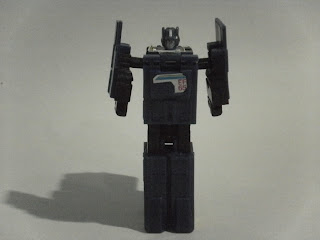 Getsuei is a blue electric train (I think).  He transforms again in the same manner as his vintage counterpart, but unlike his vintage counterpart, his upper arms are not stainless steel but plastic.  And because of that, it comes off rather easily.  The sticker on his chest is a bit crooked, and he suffers from the joint leg syndrome that is common in the G1 Transformers.  His blue plastic is also a bit duller than the real version, but that's a minor quibble. 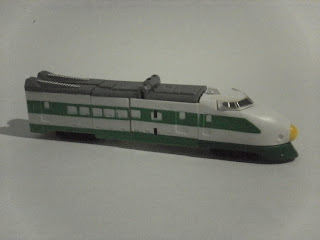 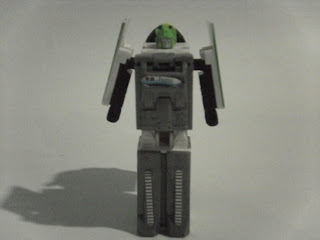 Yukikaze is another bullet train, and transforms in the exact manner as the vintage version and Getsuei.  I do have to point out at this stage that the train cabs all are pulled off the train, and the main body of the train becomes the robot, while the cab is plugged onto their backs as a backpack.  The complaint here is the same as Getsuei - the joint legs, and the sloppily applied stickers. 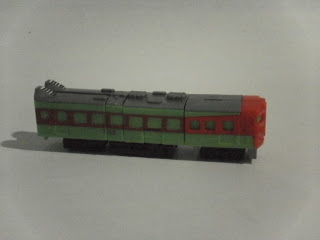 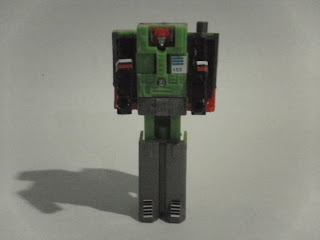 Suiken is a green and orange train and he seems a bit odd in train mode with the differeing colours of orange across his sides.  The orange on the cab is moulded from orange plastic, but the orange on teh rest of the train is painted on green, and consequently it's darkened by the green.  The paint is applied rather well though.  The transformation is very simple, and a nice touch is that the cab actually folds out into a nice cloak/backpack.  The face sculpt is well detailed and is nicely painted as well. 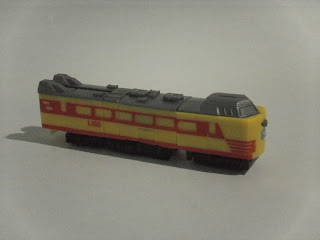 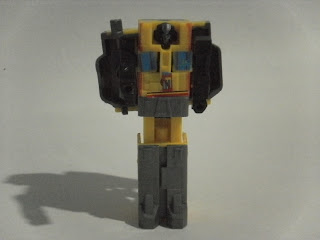 Seizen is another electric train (again, I think) and transform in the same way as Suiken.  The backpack looks a lot more interesting thanks to the hump on the cab.  The face sculpt is good, and the paint is decent, but the usual joint legs and poorly applied stickers spoil the robot mode some. 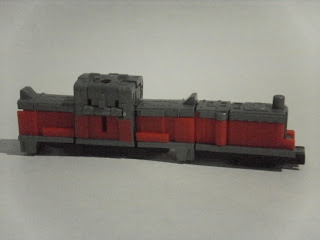 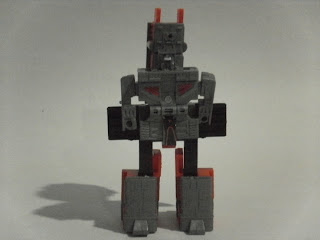 Kaen is the longest of the 6 robots and consequently, he's the tallest thanks to his "backpack.  The transformation isn't very complicated though, despite the size.  The stickers are applied the best out of the six, and I have to say I'm pleased with is tight joints. 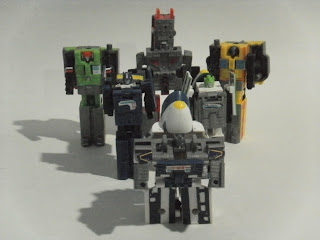 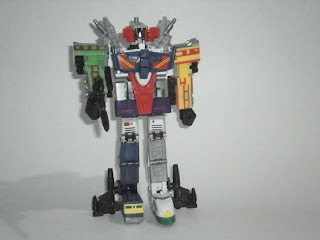 The combination isn't as complicated as the constructicons, and although the main body consists of the trains themselves, they are further kitted out and held together by the accessories including a two piece breastplate and a three piece jetpack.  The overall robot mode is blocky, but then again, it's formed from blocky trains.  The poor quality of Getsuei's arms are very visible here, as it doesn't hold onto Kaen's legs too well.  The redone cabs from Suiken and Seizan also fit poorly onto Kaen to form the sides of the robot. 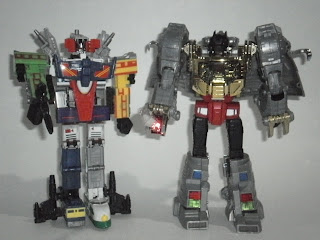 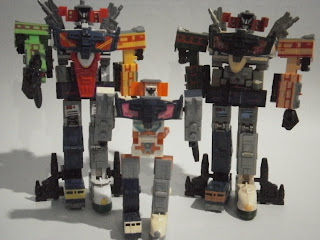 Raiden is slightly taller than his vintage Diaclone version thanks to the extra pieces.  Of course, my vintage version is yellowed with age, well played and very, very loose.  He's slightly shorter than Masterpiece Grimlock, but then again, considering how tall that Grimlock is, that's no mean feat.  I like this version of the toy, and despite the fact that it's a knock-off, somehow I think they used the original moulds from Takara to get a really good toy out there.
Posted by Novelty at 00:55