It's Animated August, and I'm still doing a transition from Jambalaya July.  It was deliberate that I ended July with Lego Ben 10, well, ended and bled over into the first day of August with it.  I'm continuing today with more Ben 10, today in the form of everyone's favourite orange mutt, Wildmutt. 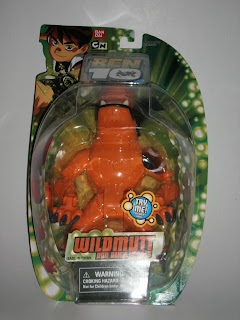 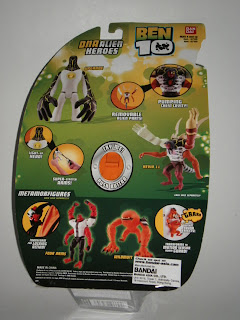 The card at first glance looks like a typical Action Figure card.  The figure is in a clear bubble, with the title card below and the toy logo on the top.  The front fo the cardback has a nice printed design that spreads out from the centre of the card, and the bit of extraneous card has an image of the main character of the series.  The back of the card just features the other toys in the line, and with a twist, their action features as well. 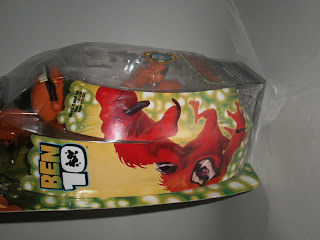 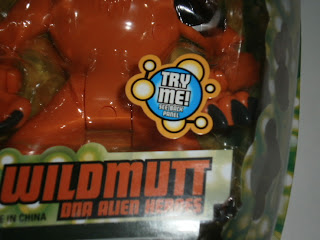 On closer examination though, the packaging does depart from the norm (and the norm for me is Mattel these days) in a number of areas.  The side of the bubble, for example, has a nice graphic image of the toy in the package on one side, and showcases the action feature on the other side.  There's the "Try Me" stricker on the front and the cut-out on the back to allow curious little tykes (and those not so little and not so tyke-like) to try out the action feature. 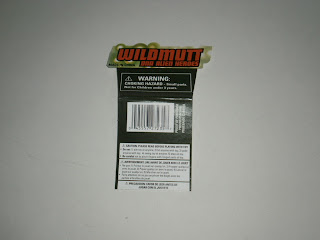 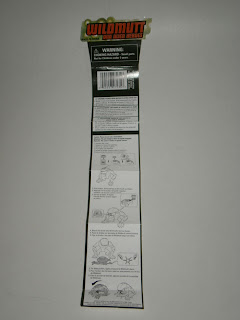 Then there's the title card... which is actually a sheet of paper... but it folds out into the instructions for the toy.  How interesting is that? 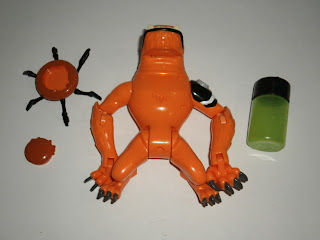 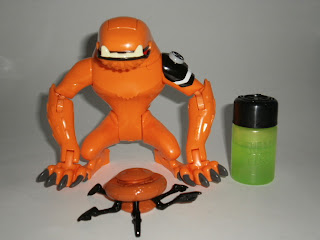 And out of the packaging, I went Whoa.  That's a lot of stuff for this price point.  OK, again, my point of reference these days is Mattel (and to a lesser degree Hasbro), but whoa.  A bottle of slime, a two piece accessory in addtion to a figure with well, about 10 points of articulation and an action feature.

Granted the figure, Wildmutt in this case, seems boring on first sight.  He's articulated in about 12 different areas, and the hinges used for the articulation is old school.  The action feature limits his posability such that he can't stand on all fours, for instance.  However, he's nicely moulded, with great detail of the fake slabs of fur (as is usually shown in the cartoon) on his limbs and back, and the Omnitrix on his arms is painted very well with no sloppy painting that I could see. 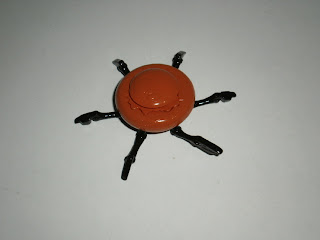 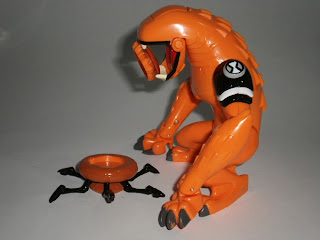 And the accessory is weird.  It looks like a burger with 6 legs and therefore appears a bit insectlike.  The way it works with Wildmutt is that when the figure is pressed down from its back, its jaws open and it bites out the top of the weird burger spider thing.  OK, not the greatest thing, but it works.  The spider legs are made of a soft rubbery plastic so that it won't break easily, and there's this weird burger looking effect on the body of the accessory.

And the goo?  Well, there's a panel on the back of Wildmutt's head that allows one to fill it with the slime, but I didn't really want to clean up the doggie after my photoshoot (or lose any of the slime) so I didn't bother to play too much with it.  It's supposed to drip from Wildmutt's mouth when the button on its back is pressed, although the consistency of the goo leads me to believe that it will drip from the mouth anyways and create a huge big mess.

Still I like this figure.  It's in a nice 6? erm... 4-inch (thanks to its slouch) range and is a nice Emergency Orange which will definately stand out on the shelf.  Will I actually display him?  Well, that would depend on the rest of his non-Lego aliens/creatures that I'd be opening... not this month, but next month - the Silver Screen September month - which really is just a continuation of Animated August where I open animated toys that have made it to the big screen.
Posted by Novelty at 19:23