#5 by 3B, Transformers Cyberverse, Optimus Prime

It isn't everyday that I get a guest post here.  But 3B from Killer B Hive have posted this Transformers up here.  Now, I'm not a huge fan of the Bayformers, so I've completely ignored the line, but apparently it is a nice line so I'm glad it's not being ignored here. - Novelty

Wow! I can't believe it's been nearly a year since my last review here on Toy A Day. I'm happy to be back and present a review on one my favorite fictional characters of all-time: Optimus Prime!

I think it's safe to say, inspite of Shia LaBeouf, Transformers: Dark of the Moon was an awesome Summer movie and totally made up for Revenge of the Fallen. What's not awesome in the rising price of toys, including movie tie-in action figures. TF:DotM had a healthy dose of movie-related product on the shelves ranging from the $9.99 Deluxe line to the $44.99 Leader class, but Hasbro knew they needed to capitalize on the under $5-8 price point. To do that they introduced the "Cyberverse" line offering pocket-sized versions of movie characters at a mom-friendly price. Let's see if it's worth the "relative" peanuts it costs.

The package is a combination of blister card and clamshell. It actually features a tabbed plastic that wraps around from the left to right and held down by tape. It's nothing spectacular, but it's design allows you to see the whole figure so that's pretty effective packaging in my book. 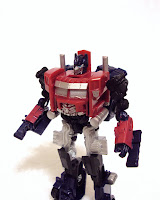 The robot mode is just under 4" tall and features plenty of sculpted details that manage to vaguely imitate Prime's on-screen look. There are the chest formed by the windshields, segmented abdominal sections, engine block that forms the lower torso and his legs are made with the nose of the semi truck. It's not 100% accurate, but passable considering the figure's scale.

Articulation is a mix of great and non-existant. Optimus has ball-joints on his sshoulders and hips with good range, while his elbows and knees are simple hinges. There is no articulation in the head other than the flip up feature used in converting him from robot to vehicle. It's too bad they couldn't get a swivel in there, because that would have been good enough for me. 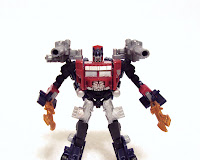 The accessories give Optimus Prime a few options when he's on the battlefield. He can wield the blades in his hands as dual swords. The same goes for the large cannons, but those also attach to his smokestacks giving him shoulder mounted artillery. Both of the cannons and swords offer nice detail, especially the blades which look like the were taken straight from the film designs. 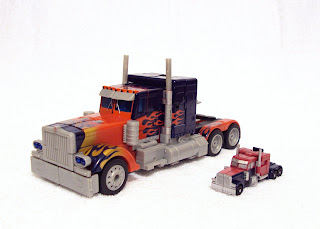 In vehicle mode, the biggest difference between "Battle Steel" Prime and the on-screen Optimus is the paint scheme. Gone are the hotrod flames I've despised since 2007, replaced by solid colors that follow more of a G1 motif. That's probably why I caved and picked him up, since I would have otherwise skipped this scale altogether.

The included accessories are what put the "Battle Steel" in Battle Steel Optimus Prime, even when he's in truck mode. The two bladed cannons OP is carrying in the package combine into a jet engine of sorts that snaps into the bed of the truck. They swing around the sides of the truck to create offensive weaponry and the removable blades can also swivel around, making them look like wings.

Out of the two modes the truck is my favorite. It looks 100% like a real vehicle and even with the ridiculously large rocket engine attached, it still manages to look cool. The only downside is the scale when compared to other Cyberverse figures, although if you're a Transformers collector, it's nothing you aren't already used to. Although the Commander class (Optimus Prime, Megatron, etc.) is larger than the Legion class (Bumblebee, Starscream), it's still undersized next to the smaller figures, just like the Voyager class is to Deluxe sized figures. 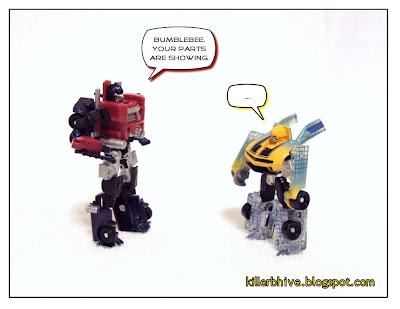 I'm not a fan of this scale and it kind of sucks because toy prices have been out of hand lately, so finding a cheaper alternative is always on the back of my mind as I'm standing in the toy aisle. I didn't care much for the minicons back in the late '80s and I don't care much for them now, unless the enhance the "regular" scaled figures. For me, this is probably where my Cyberverse collection ends. If you're trying to build Dark of the Moon collection, but are short on cash (or space), this may be your ticket. Otherwise, I'd stick to the Deluxe and larger lines. 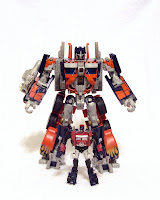