I was in Tokyo about three ago when I picked this up from a Supermarket in Narita.  Yes, supermarkets in Japan apparently has a toy aisle as well. 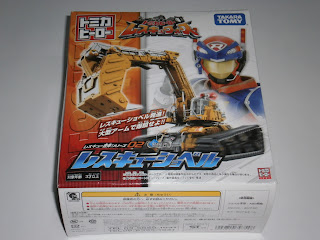 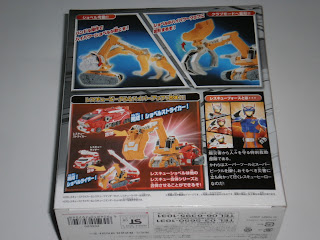 It's from the Tomica Rescue: Rescue Force toyline, and it's the Rescue Shovel, or according to Wikipedia, it's the レスキューショベル (Resukyū Shoberu)  The box is boring - it has an image of the vehicle from the show as well as a humanoid character, presumably the pilot, on the front.  The back whos the action features and how it can gattai (combine) with some of the other vehicles in the line. 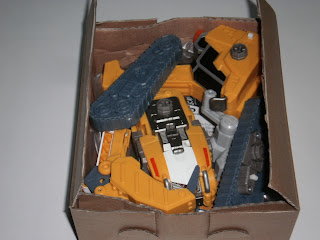 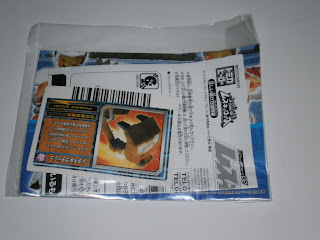 The vehicle actually comes in parts - some assembly is definitely required.  Despite the instructions being totally in Japanese, the accompanying pictures are clear enough for me to be able to piece them together.  This isn't Lego after all.  Basically there are pegs and holes to connect them to with smaller clips and pegs to keep everything level and in place. 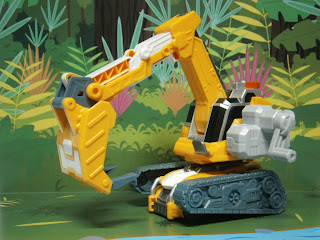 The vehicle seems a bit Tonka-ish, but it does have a neat action feature.  The bigger pegs and holes have a special mechanism built into them which allows a rotating motion to be transferred from one part of the vehicle to another part.  In this case, rotating the grey handle on the cab causes the shovel to move forwards and backwards.  Cool beans.  I quite like this little vehicle... except that it's not little.  It's almost 8-inch in lenght.  I wish I got the other vehicles in the line to play with, but alas, this vehicle seems to be a Japan only line.
Posted by Novelty at 00:33